What US Embassy documents reveal of schemes against Iran

This week Supreme Leader Ayatollah Ali Khamenei recommended the youth to study the documents of the US Embassy in Iran. Hereby a number of points are illustrated to show what schemes Washington had planned against Iran. 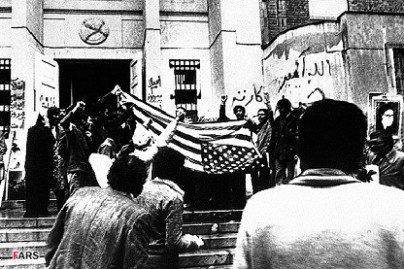 1.US attempts in Iranian years 1322-25 to maintain the Pahlavi

Iran-US relations were established in 1944 at the level of ambassadors. After the world war II US president Truman warned that if the USSR did not remove its forces from Iran, the US would retake its troopers to the country. That made Iran’s Mohammad Reza Shah consider the US as a friend, improving relations with Washington.

At that time, Washington empowered Mohammad Reza shah to rein in opposite forces as a means to make the US a footing in Iran and prevent USSR adventures into the country.

Iran-US trade relations grew and the young king needed modern weapons to ensure his survival, the deposit of which was the states.

In the Iranian year 1326 an arms deal worth $10 million was signed between the two countries; but it is said the real value of the contract was at least $70 million. Two years later the US Congress signed a law on helping shared defense, where Iran was given $27 million. One year later the Congress improved Iran from the ranking of South Korea and the Philippines and included it in group with Turkey and Greece, whereby a sum of $131 million was given to the three countries.

The end of the WWII changed the global system and put two powers the US and the UK against each other. The US has set forward to infiltrate the areas formerly under the influence of the UK.

There, the Persian Gulf and Iran were among the major battle fields of the two powers. The US had found good favor with Iran after settling the Azarbaijan disturbances and was seeking to strengthen its footing in Iran.

However, the US and UK were the two sides of the same coin which was all about Iran’s oil. The US relied on increasing political favor in Iran to become UK’s partner in Iranian oil. America’s strategy after WWII was also to prevent the spread of communism in Iran based on the Truman doctrine.

The joint US-Iran committee met for the third time in Tehran in August 1976. The committee set a goal of $15 billion (apart from oil and military trade) for five years. The committee agreed to $26 billion for the years 1975 to 1980. It also agreed that the two countries turnover would surpass $40 billion excluding military trade.

A lot has been written about the 1953 coup. On that occasion, the US kicked off the national Mossadeq administration in favor of his servant the Shah and his regime so that its interests in Iran would be met.

William Bloom writes that in the coming 25 years after that, the Shah was the closest ally of the US in the developing countries, so much so that the Shah had practically put himself in the service of US military and intelligence organizations to be used as a weapon against the USSR.

Eavesdropping units were launched along the border with the USSR and US airplanes would use Iran as a base from which to launch surveillance flights over Russia. In October 1955 Iran was also a member of the Baghdad treaty which had been set up by the US against the USSR.

4. The US attempt to change economic structure and development

The end of the WWII came with immense political, economic, and intellectural change and altered power relations. The advancements of the USSR and communism worried the US greatly.

The Truman scenario had envisioned great funds to be allocated to countries that could become a base for the USSR.

There, ME countries, Iran in particular, were put on focus, where the Shah’s land reform is one of the greatest changes.

One of the greatest results of the land reform was to damage domestic product and remove the grounds for Iran’s independence.

The land reform brought about major decline in agriculture product and Iran became dependent on imports from the US.

5. The improvement of economic-military relations between Iran and the US to secure the Shah

Many believe that the unbridled increase of oil revenue and the Shah’s insatiable thirst to buy weapons from the US is a sign that he had fully put himself in the service of Washington. This was what finally formed a major source of rage at the king.

On the 30th of Khordad, Iranian year 1326, as two weeks had passed from the announcement of plan marshal by the US, Iran and the US signed an arms deal worth $10 million.

In the Mehr month of 1326, US Ambassador to Iran George Allen and Iranian Minister of War Mahmoud Jam signed a deal which extended the US mission in Iran to the end of the following Iranian year. This agreement would put all of Iran’s technical information in the hands of US advisors.

The US also equipped the Iranian police with all semi-military equipment such as tear gas, batons, light weapons. It also started to educate Iranian police and the SAVAK members as well as riot forces.

One of the US Embassy documents reads: the Shah is intending to negotiate the US into cheap purchase and reduce his reliance on the US. He wants to diversify its military equipment and is turning into another bother like the USSR. … The Shah is also growingly angry with US attempt to control his military spending. He believes he has to have the final decision on threats and how to prepare for them.

The document points to flourishing economy following the inlet of petrodollars, adding: the Shah wants to create close military relations with mutual gains with the US. Evidence shows the maintenance of America’s monopoly over Iran’s military arms should be seriously doubted.