Dr. Klantari said : we had not an enough sleep for 10 days , during the 4th Karbala operation . it was hard but we had an unit goal we endured all the hardships . 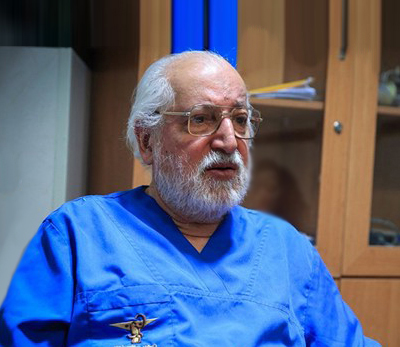 Dr. Klantari said : we had not an enough sleep for 10 days , during the 4th Karbala operation . it was hard but we had an unit goal we endured all the hardships .

Dr . Sayyed Mohammad Reza Kalantari Motamedi is one of the most prominent medical characters during the holy defense so we decided to have an interview with him for the beginning week of holy defense . he had an interview with the journalist of Navideshahed and explained us about his memories . he was the creator of the field hospital and had started his surgery in the field hospital at the fore front.

Dr. Sayyed Mohammad Reza Motamedi who is the most prominent character in the history of the Iranian medical, was born in 1939 . He is a very experienced doctor . he is the founder of the vascular surgery in Iran . he was graduated from the medical faculty of Tehran University I 1964 and he had taken his surgical specialty degree in America in 1974 .

Dr. Kalantari explained us about his activities during the imposed war and said : at the beginning of the war I was the deputy minister of health . I passed my surgery periods in the USA , a country which suffered from war , I mean shooting on each other was a kind of hobby for them and I usually faced with the injuries who were injured by shot gun or bullet war so I was familiar with these types of injuries .

He continued : as I took my degree from the USA , I decided to came back to my country to create this field in my country .

Dr . Motamedi continued : I started the surgery in the field hospital in Iran and fore front was the mere place which I felt good and being useful and that was the second goal of my returning to Iran , to save the people who would absolutely die after the injuries that was very enjoyable I could not find it anywhere .

Dr . Kalantari Motamedi started to explain us about the God's helping during the war . at the beginning of the war , we had not field hospitals and we only had a tent in which we performed the surgery in it . they attacked to our tent twice a day but their bombs did not explode by the sake of God . I had seen many things like these during the second defense .

We put all the facilities at the fore front

Dr. Mohammad Reza Kalantari continued : we had transferred all the facilities of our hospitals in cities to the field hospitals since Imam Khomeini told us " war is the most important thing and all the facilities must be at the fore front " so we tried to do the best . there were no shortage of medicine during the war .

He also mention that : there were no enough medicine in Iran but we imported from the other countries and gradually we tried to produce them in our country .

Now he wanted to explain us a memory :

I remember that we had not enough sleep for 10 days during the 4th Karbala operation . I was not good at all and there was an injury whose surgery must be done . in front of the surgery room , I understood that he had not taken a picture of his lung , I sent him to take and slept for 20 minutes as he came back I started the surgery which was a good one . sometimes I must managed 8 surgeries, it was too hard but we all worked for a unit goal . sacred defense was the best and the holiest period of my life .