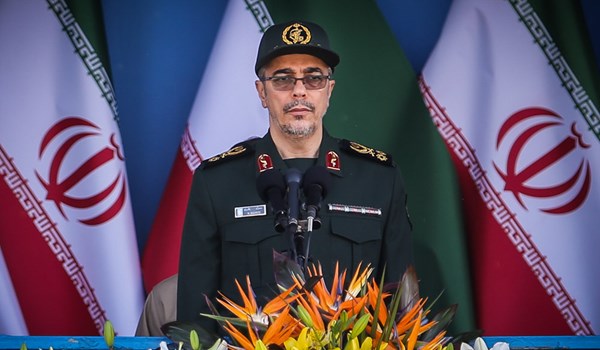 "The terrorists (in Ahwas attack) were supported by the ISIL and another terrorist group whose leaders are in the European states," General Baqeri said in Tehran on Monday afternoon.

He described the Monday missile strikes against the ISIL positions in Eastern Syria as the first stage of Iran's revenge, and said, "The massive missile and drone operations of the (Iranian) Armed Forces were of high value because these drones travelled through the airspace of several countries to reach the target with high precision and inflicted heavy blows to the enemy. (Also), the missiles hit the enemy's positions after flying for over 550km."

General Baqeri warned that other stages of Iran's revenge for Ahwaz attack are in the offing, stressing, "The enemies should know that they cannot endanger Iran's security."

During the operations codenamed Zarbat-e Moharram (Blow of Moharram) carried out at 2:00 AM (local time) on Monday the headquarters of Takfiri terrorists near Albu Kamal region in Eastern Euphrates was attacked from Kermanshah province in Western Iran, 570km away from the targets.

The missiles were of Zolfaqar and Qiam classes with ranges of respectively 750km and 800km and precision-striking capability. At least one of the missiles bore slogans 'Death to America', 'Death to Israel', 'Death to Al Saud' and a Quranic verse meaning 'fight against the friends of Satan'. They travelled over the Iraqi airspace and hit Eastern Euphrates region in Syria.

Then a few minutes after the missile strikes, 7 IRGC drones targeted the terrorists' positions in the region again.

According to reports, heavy damage has been inflicted on the terrorists' infrastructures and positions.

26 people were killed and 69 others were wounded in an attack by al-Ahwaziya terrorist group during the nationwide military parades in the Southwestern city of Ahwaz on September 22.

The terrorists attacked the bystanders watching the annual Armed Forces' parades, marking the start of the Sacred Defense Week, commemorating Iranians' sacrifices during the 8 years of the Iraqi imposed war on Iran in 1980s, in disguise of the IRGC and Basij (volunteer) forces, killing and wounding several people, including innocent women and children.

None of the officials participating in the military parades in Ahwaz city in Khuzestan province was injured in the attack.

The number of the terrorists who carried out the attack in Ahwaz had on September 22 been put at 4 by Spokesman of the Iranian Armed Forces Brigadier-General Abolfazl Shekarchi. The general had explained that three of them were killed and the last one was captured by security forces.

He told FNA that none of the terrorists could escape, noting that other reports about the details of the attack are not confirmed.

Later the intelligence ministry put the number of terrorists at five, naming them as Ayad Mansouri, Foad Mansouri, Ahmad Mansouri, Javad Sari and Hassan Darvishi who were killed on the scene of the clashes with the Iranian security forces after riddling people with bullets.

Meantime, Head of the Islamic Revolution Guards Corps Public Relations Department and IRGC Spokesman General Ramezan Sharif said that the terrorists who attacked people during the Armed Forces' parades in Ahwaz were affiliated to al-Ahwaziya stream which is nourished by Saudi Arabia.

He added that the terrorists aimed to overshadow the magnificence of the Iranian Armed Forces' parades.

General Sharif said that people were also invited to watch the parades and the terrorists both fired at people and the Armed Forces.

He said that such attacks were precedent and al-Ahwaziya terrorist group had earlier fired at the convoys of people who visited the Southern cities of Iran which resisted against Saddam's aggression during the 8-year Iraqi-imposed war against Iran in 1980s.