Centuries of occupying and destroying other countries 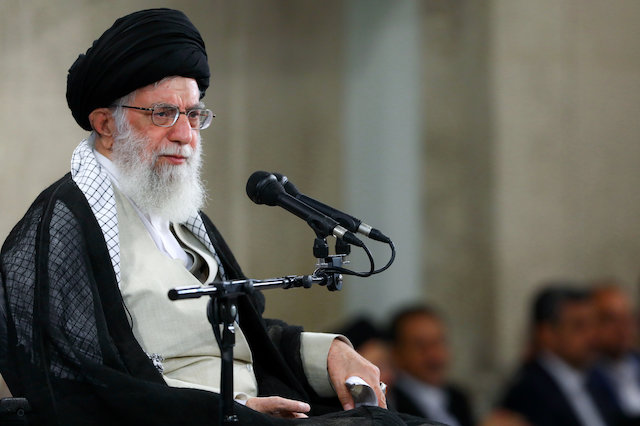 After the US withdrew from the nuclear deal known as JCPOA, the Leader of the Islamic Revolution gave a speech at Farhangian university and referred to the matter of continuing the agreement with three European countries, stating: "I do not trust these three countries and tell you not to trust them." Hence, the website of Khamenei.ir explores and issues some previous actions of these European countries against the Islamic Revolution of Iran and other countries, based on the statements of the Leader.

Centuries of occupying and destroying other countries

Today, you can witness that the Americans and the Europeans have managed to conquer the entire world because of the knowledge they’ve acquired.

You know that the US, England, France, and many other European countries – even small countries in Europe – have managed to occupy other countries, some of them managing to keep ahold of those colonies for several centuries. They've [Europeans] exploited every resource that they had, and they destroyed them [regions the Europeans invaded]. They achieved absolute power over those nations, and they became dominant because of their knowledge.

Colonizing of Algeria and Tunisia by France

As I said, our society of book readers, unfortunately, pays little attention to contemporary history. You should read contemporary history to see what happened to India, Burma, Africa and Latin America because of colonialism. You should read this history to see what happened in Algeria, Tunisia and other such countries at the hands of France – this seemingly orderly, neat, chic and polite country – and colonialism.


A hundred years of conspiracy against the Muslim world

Hatching plots against the world of Islam and this region, in particular, is not a new development. Since many years ago -- since 100 years ago: World War I until today -- this region has been exposed to many pressures by arrogant powers. One day, it was England, one day it was America, and one day it was France. It is 100 years or more now that arrogant powers have been pursuing their goals here.

Leading the front of Arrogance

The savage attack on Gaza, over the past week, which is truly shocking[...]--the shocking aspect is that leaders of the Front of Global Arrogance behave so shamelessly during this crisis. This front not only refuses to frown at the behaviour of the brutal Zionist regime, and they not only refuse to prevent it from carrying out its criminal activity, rather they support and encourage it. The USA, explicitly, supported the Zionists; England supported them; France supported them: these are the leaders of global arrogance. Muslims do not have any enemies who are as hated and brutal as these people.

From the Revolution onwards, you have seen what they have done. It is clear: the first round of sanctions, attacks, treacherous activities, espionage attempts, security infiltrations and the widespread propaganda attacks against the Islamic Republic were carried out by Westerners, by the Americans, and by the Europeans. And look what they did afterwards: before the imposed war, they helped leftist groups: those groups were leftists, but their supporter was rightist America!

Trying to abolish the Revolution

The underlying issue had nothing to do with oil-rich regions; rather, it was about the essence of the Iranian government and the Revolution. They wanted to destroy the Revolution. The powerful US and Europe stood behind Saddam and helped him as much as they could. They helped him as much as possible! Second, third-rate countries in Europe were not important. The central powers of Europe--England, France, Germany, and Italy, countries which had power and capability in Europe--stood behind Saddam and supported him to the fullest.

And, at the beginning of the war, the troops of Saddam's regime were limited in number; and they had below average resources; but, with the passage of time – over a few years – these resources increased daily. However, war destroys resources. For example, at the beginning of the war we had tanks, but some of them were destroyed; we had some cannons, but many of them were ruined; we had ammunition, but all were used up; these things are naturally consumed during a war: war reduces resources. As the war went on, the resources of the Ba'athist regime increased. Who gave them these resources [weapons]? [It was]France, England, Germany, and the US.

The US used to help Saddam by giving him missiles, defensive weapons and even war plans. It used to help him with his satellites.

In the middle of the war(8-years sacred defence), France gave its most advanced airplanes and helicopters to Iraq; and Germany provided Saddam's regime with chemical and toxic substances so that he could use them on the front lines.

[Ironically,] Those who are often attacking countries today, with accusations of chemical weapons use, officially and publicly gave chemicals to Saddam for making chemical bombs, and other chemical weapons, to use on the front lines.

At one time, one of the European governments used to express friendship and a tendency to establish relations with Iran. The same government formed a court hearing after the Mykonos restaurant issue and levelled accusations against high-ranking officials of the country [Iran]. European governments cooperated with them, and all of them withdrew their ambassadors from Tehran. We have not forgotten those things. They tried to knock us across the face, but they received a stronger response.

Following the US on sanctioning Iran and spreading propaganda against Iran

We have no problems with Europe either. It was the Europeans who clashed with us. I said to a European president, who had recently come to our country, that Europe should liberate itself from going along with the American's policies. The Europeans have followed along with American policies. He imposed sanctions on us, and they followed the USA. He made his propaganda against us, and they followed the US. Well, what should we do? In other events, it was the Europeans who began the enmity.

Interfering with the defence power of the Islamic Republic

If European governments repeat the same thing that the US states; if they ask why Iran is present in the region – well, what is that to you? Why should Iran not be present?  Or when they echo US criticism against our missiles, with a range of two, three thousand kilometres, this does not make sense. What is it to you? Why do you yourselves have missiles? Why do you, yourselves, have nuclear missiles? Why do you have atomic weapons? If they want to interfere in the defensive power of the Islamic Republic and speak against it, this cannot be done. We will not accept this from the Europeans, in any way! They should not sing along to the tune of the US when it sings songs of aggression and foolishness.

French playing the role of the bad cop during JCPOA negotiations

What manner of hostility has the Islamic Republic ever shown towards France? Because Imam (r.a.) resided in France, for a while, that country was even praised by revolutionary forces, but you see how they treat Iranians today. You’ve witnessed that, on the nuclear issue, the French played the role of a bad cop. Of course, it was the Americans who set up this situation, but the French took on the worst position regarding the nuclear matter. What have we ever done to the French? Have we shown any hostility towards them?

Obstinacy and malignancy during JCPOA negotiations

Military action on Syria was a crime. I, unequivocally, declare the President of the United States, the French President [Emmanuel Macron], and the Prime Minister of Britain [Theresa May] as war criminals: they have committed a severe crime. Of course, they will benefit from none of these attacks, just as they did not while in Iraq, Syria, and Afghanistan where they were present over the past years, committing the same criminal acts: they gained no advantage.