Bodies of More Civilians Killed in US Attacks Unearthed in Raqqa

A sum of sixteen bodies of civilians killed in the US-led coalition's airstrikes on Raqqa city were found on Tuesday. 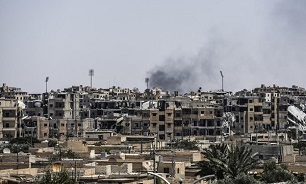 By the report of Navideshahed:
Members of Raqqa Civil Council unearthed a sum of twelve bodies of civilians that once were killed in the US air attacks, adding that the bodies were discovered under debris of two buildings in al-Qatar and Panorama neighborhoods.

Four more bodies of civilians that were killed in the same way were found under the debris of a building near al-Baladi Sports Stadium in Raqqa city.

In a relevant development last week, a sum of thirteen bodies of the civilians killed in the US warplanes' attacks on Raqqa city were discovered.

Members of the Civil Team in Raqqa discovered the bodies of six civilians from under the debris of buildings in al-Badou neighborhood in Raqqa city that were destroyed in the US warplanes' bombardments.

In the meantime, body of another civilian was discovered from under the debris of al-Kahroba neighborhood in Raqqa city.