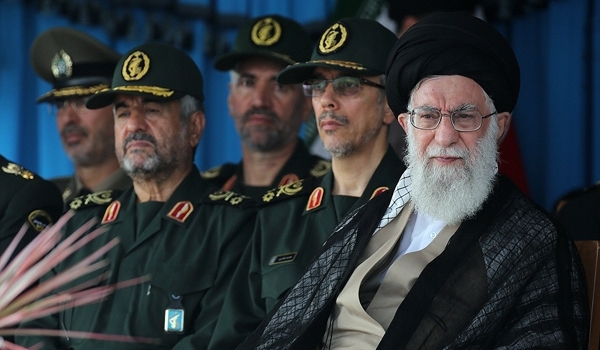 By the report of Navideshahed, "The arrogant powers, spearheaded by the cruel and oppressor US, see their interests in fomenting internal wars and increasing the heinous terrorist activities and regional clashes and unfortunately, some regional states help them," Ayatollah Khamenei said, addressing the graduation ceremony of army cadets at the Imam Khomeini Naval Academy in Noshahr in Northern Iran on Sunday.

He warned that the US and Israel fear the rise of an Islamic power in the region, but meantime, said that the Islamic Republic's powerful resistance against the arrogant powers has foiled their plots in the region.

Ayatollah Khamenei described Syria, Iraq and Lebanon as instances where the US plots have failed.

"Political analysts and elites in the world are surprised and have admitted this reality that Iran has thwarted the world powers' plots in the region by reliance on God and the national power," he said.

"By standing against the US, the Islamic Republic and the Iranian nation has proved that if a nation does not fear the bullying powers' frowning and relies on its own capabilities, it will force the superpowers to step back and admit defeat," Ayatollah Khamenei said.

In relevant remarks on Saturday, Ayatollah Khamenei underlined during a meeting with Turkish President Recep Tayyip Erdoğan that the Muslim world is in dire need of unity.

He described the concern as the reason behind animosity of the US towards powerful Islamic countries and added: "The Islamic Republic of Iran and Turkey are two powerful and dignified countries of the region and share the same motivations for the Muslim World; thus, political and economic relations between the two countries should expand.”

The Leader of the Islamic Revolution referred to the existing cooperation and good relations between the Islamic Republic of Iran and Turkey since the coming into power of the movement that advocates Islam in Turkey, and stressed: "The commonalities should be reinforced as much as possible.”

Ayatollah Khamenei appreciated the positions taken by Erdogan regarding the matters of Myanmar; then referring to the matter of Palestine, he reiterated, "The Palestinian cause is still very important and it should not be ignored even for a second.”