The Zionist regime will perish in the near future: Imam Khamenei

Like all free countries of the world, the people of Palestine--real Palestinians-- should be polled. They should determine the political system of Palestine, and that governing body will decide on the future of others who immigrated to Palestine. 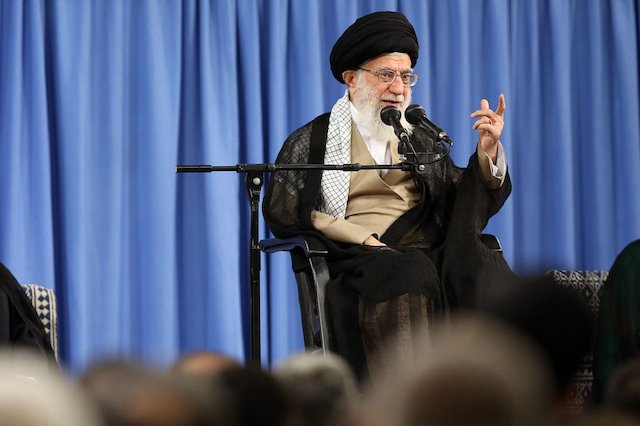 By the report of Navideshahed, In meeting with government officials and Islamic countries’ ambassadors, this morning-- Friday June 15,2018-- on the occasion of Eid Al-Fitr, the Leader of the Revolution stated: "Today, the policy of the Front of Arrogance represents creation of conflicts and gaps between Muslim nations and inside the Muslim nations, among communities within these nations. This is a plot that the US conspirators and the Zionists have designed for our region; signs of which can be seen in our region."

Ayatollah Khamenei offered solutions to the problems the West Asian countries are facing by stating that: "The solution is that Muslim nations discover the main point--i.e. animosity of the Front of Arrogance against the Islamic Ummah and society--and stand up to it. The other essential point constitutes the Zionist regime. This regime is essentially placed in our region, at the heart of the Muslim World, to create conflicts and complications inside the Muslim World."

The Supreme Leader of the Islamic Revolution declared: "The Zionist regime is not going to last long. All historic experiences prove this by certainty; because this regime has fundamental legitimacy problems.  That some spineless states in West Asia establish diplomatic relations-- open or covert-- with the Zionist Regime cannot resolve the conflict against Palestine. The problems of the Zionist regime do not stem from its relation with other governments and cannot be resolved if a few countries shamelessly develop relations with it. The fundamental probleml lies at the regime's illegitimacy."

Ayatollah Khamenei  added, " They forced out a historical nation from their homeland; they can never cross out Palestine from world's historical and geographical memory."

Ayatollah Khamenei described the moving of the U.S. embassy to Quds a futile move in the resolving of the Zionist regime's illigitimacy and added: Their problem will not be resolved by moving embassy of the United States. There is no doubt that this regime, which is based on a false foundation, is going to perish by means of the efforts of Islamic countries."

The Supreme Leader of the Islamic Revolution once again declared Iran's proposal to resolve the issue of Palestine and held: "Like all the free countries of the world, the people of Palestine--real Palestinians--must be surveyed. Their opinions must be asked for. They are the ones who must choose the governing  political system in Palestine. That [elected] government should decide on the fate of others who entered Palestine. There is no other solution to the issue of Palestine but the aforemention one; this is how the fraudulent regime is going to perish; this will take place in the near future."

The Leader pointed to the lack of unity among some Islamic countries against Zionists measures by saying: "Typically having a common enemy will bring about unity; however, this enemy [the Zionist Regime] has brought about conflicts, hypocrisy, and conspiracies among some leaders of Islamic countries. Once the Zionist regime perishes, Muslims will find their way back to unity."