The Syrian Army forces continued advancing in the Eastern Badiyeh (desert) of Sweida on Tuesday, driving ISIL out of more positions. 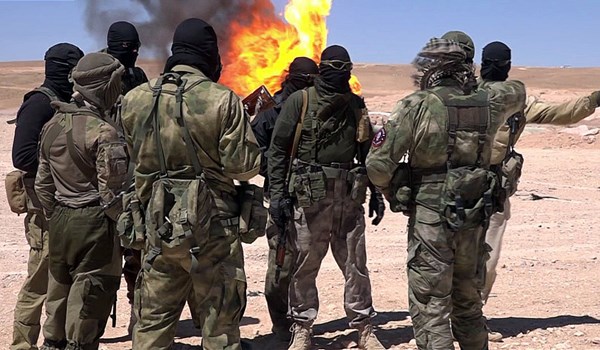 By the report of Navideshahed ( IRAN ) :
The army men pushed ISIL back from Minqar Rahbah, Rahbah and Hawi Hossein regions in Badiyeh.

In the meantime, the army's artillery and missile units pounded ISIL's positions and developments in a region in the Eastern Badiyeh, destroying their strongholds and killing a number of them.

Also, other units of the army carried out an ambush operation in Qabr Sheikh Hossein in Badiyeh, inflicting heavy casualties on a group of ISIL terrorists and capturing several more.

The army has tightened noose on ISIL following its recent advances in Badiyeh.

On Monday, the army men, backed up by artillery and missile units, stormed ISIL from different flanks in the Eastern Badiyeh of Sweida, and captured Marqab Qabyan, Huwiya Qasin, al-Kasirah and Tal Abu Qanem regions.

The army men inflicted major casualties on the terrorists and destroyed a large volume of their equipment.

The ISIL is now trapped in an area as large as 250sq-km in Badiyeh.