Iran's Supreme Leader Ayatollah Seyed Ali Khamenei blasted the US for its destructive role in the region, and said that Washington's diplomacy in the Middle East has completely failed throughout recent decades. 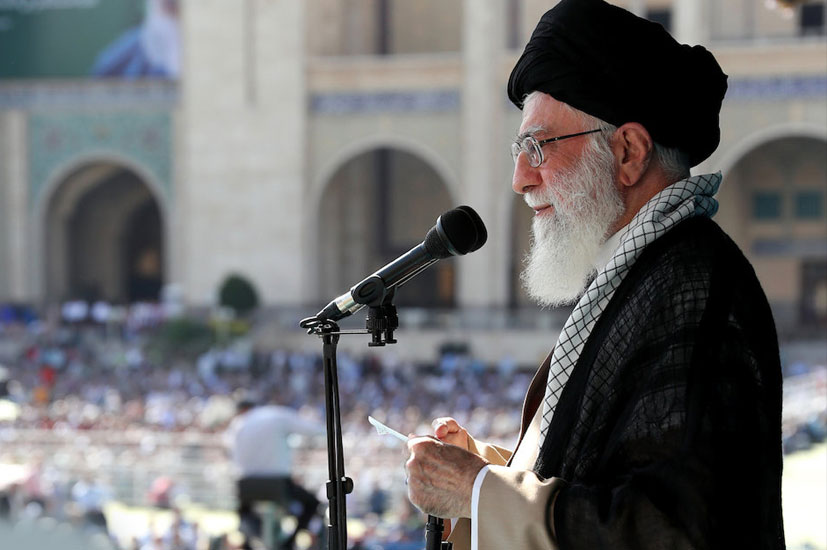 Navideshahed, Iran's Supreme Leader Ayatollah Seyed Ali Khamenei blasted the US for its destructive role in the region, and said that Washington's diplomacy in the Middle East has completely failed throughout recent decades.
"The United States has evidently failed in achieving its intended policies in the region; Muslim nations worldwide are now more united than ever before in pursuing their common goals despite enemies' plots," Ayatollah Khamenei said on Friday in Tehran, addressing and leading the Eid al-Fitr prayers which is a Muslim holiday marking the end of the fasting month of Ramadan.

Iran's Supreme Leader said that the United States has wasted trillions of dollars in its pursuance of certain policies in the Middle East, but has achieved nothing instead and US President Donald Trump has openly admitted his country's failure.

"The US president said that ‘we spent $7 trillion in this region, and gained nothing in return.’ This means defeat. The US has suffered defeat in the region. The Great Satan has fallen short of achieving its goals, despite all its efforts, evil dispositions, and hot-air rhetoric. It has just wasted its resources,” Ayatollah Khamenei said.

Tweeting in February, Trump had said that his country had "so stupidly” spent the sum in the Middle East.

Elsewhere in his remarks, Ayatollah Khamenei said that unity among Muslim nations had grown stronger, stressing that this was clearly evident in the powerful participation of Muslims in last Friday's rallies to mark the International Quds Day.

Each year, Muslims worldwide rally on the last Friday of Ramadan in solidarity with Palestinians in response to an initiative started by the late founder of the Islamic Republic Imam Khomeini.

"This means that, despite the enemies’ propaganda, Muslim nations and the great nation of Iran have grown closer and more aligned with one another,” Ayatollah Khamenei noted.

The Supreme Leader, however, said that the enemies are constantly plotting against the Iranian nation, adding, "This is because they are afraid of the Iranian nation's might, steadfastness as well as their ambitions to forge stronger bonds with other nations."

"The enemies will obviously continue their struggles but will fail," Ayatollah Khamenei added.

He called on the Iranian nation to be vigilant in the face of enemy's plots specifically manifested in efforts to mount economic pressure on the country and disappoint the Iranian people.

In relevant remarks earlier in June, Ayatollah Khamenei blasted Israel for occupying Palestine and continuing to kill the Palestinians, and called on the international community to break its silence on the realities on the ground in the Gaza Strip.

"Today, democracy is a modern method, which is accepted by the entire world; we said that to determine the fate of the historical country of Palestine, they must refer to the people of Palestine and this proposal has been registered at the United Nations as the Islamic Republic’s opinion,” Ayatollah Khamenei said in a meeting with a group of university professors and academics in Tehran.

The Supreme Leader said that the fate of Palestine must be determined by Palestinians themselves, including Muslims, Jews and Christians, who originally lived in the historical land of Palestine.

"A poll must be conducted among Palestinians, who have lived there since 100 years or 80 years ago, including Muslims, Jews and Christians, and whether they live inside or outside the occupied territories," Ayatollah Khamenei added.

The Supreme Leader underlined that whatever the Palestinians said and voted for must be done, and asked, "Is this a bad idea? Aren’t the European countries ready to understand this?”

Ayatollah Khamenei then referred to a recent European tour by Israeli Prime Minister Benjamin Netanyahu in which he aimed to undermine Iran's standing and influence in the region, and said, "Then that oppressor and wicked child-killer goes to other countries and plays the victim that Iran wants to do away with several millions of our population."

The Supreme Leader went on to say that the European audience also listens to him, shakes his head and does not say that it is you [Israelis] who are currently committing these crimes in Gaza and al-Quds.