Nasrallah soldiers in defense of All-Allah

"Sayyed Mustafa Badr al-Din" Martyr for the conservation of the Holy Bases/inimitable Commander of the Islamic Republic of Lebanon Martyr Mostafa Badr al-Din presence and its extensive influence in war with arrogance in Lebanon, Iraq, Syria, Kuwait.. 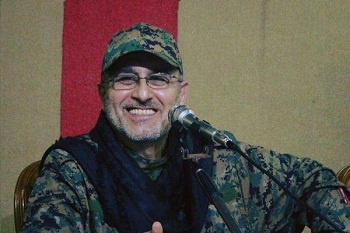 By the report of Navideshahed, "Sayyed Mustafa Badr al-Din"; Martyr for the conservation of the Holy Bases / inimitable Commander of the Islamic Republic of Lebanon
Martyr Mostafa Badr al-Din presence and its extensive influence in war with arrogance in Lebanon, Iraq, Syria, Kuwait and Yemen, the international model of the Islamic resistance in Lebanon struggles with Zionism and its allies and mercenaries to display.

, Sayyed Mustafa Badr al-Din was born on April 6, 1961, in the( Gobeiri) Shiite area in the south of Beirut, capital of Lebanon. He graduated from high school in the same city. Shortly after high school, she married Fatima Harb. A week after the sermon was surrendered; the Israeli army invaded Lebanon and landed itself in Beirut within a week.

Sayyed Mostafa was one of the first to stop the advance of the Zionist troops in the Kholde area in the south of Beirut, Emad Muqniyeh, Samir Matot and other Lebanese mujahideen youths in the area.
A year after the battle, Sayyed Mustafa traveled to Kuwait, where he was arrested and tried for allegedly attempting to destroy US and French targets. Seven years after his arrest and in 1990, after Saddam's attack on Kuwait, he was able to escape from prison and, through Iran, escorted himself to Lebanon.
He was one of the senior commanders of the Islamic Resistance, known as the jihadist "Sayyed Zulfiqar", since the early 1990s, while fully aware of the movements of the Zionist enemy in the occupied territories, played an important role in the victory of the Islamic Resistance in the two wars of "Reckoning Accounts" (1993) ) And "clusters of anger" (1996).
He then played an important role in the operations of the Islamic Resistance capture, and then, as the senior security chief of the Islamic resistance after Martyr Emad Mughniyeh, struck hard strings against the Israeli intelligence networks in Lebanon.
Together with his old friend, his brother-in-law, martyr Emad Mughniyeh, he was able to defeat the Zionist army. After assassination of the martyr Emad Mughniyeh in Damascus in February 2008, he succeeded him and led the Islamic resistance of Lebanon.
The next year, with the onset of the crisis in Syria, led the Islamic Resistance Forces in the country, which took the dinner to prevent the threat and sacrifice of religious sanctities, especially the holy shrine of Zainab (SA).
He played the most important role in guiding and winning many Islamic resistance operations in the territory of Syria and in helping the hash-al shabi in Iraq until May 10, 2016 (May 20, 1959) in the attack of the Takfir terrorist gunmen on the base of the Islamic Resistance Forces Around the international airport of Damascus, she was martyred.
Fatemeh Harb, the wife of martyr Sayyed Mustafa Badr al-Din, in an interview with the press reporter of the International Defapress, spoke in detail about the life of the martyr that we are discussing.

Explain to us the role of women in the resistance movement and the resistance generation?
As you know, Lebanon has been widespread since 1982 with the Zionist regime. Since then, Lebanese women have been involved in all the struggles of the men of this land against the Zionist occupation.
An important part of this accompaniment was the sacrifice of Lebanese women who sent their children to martyrdom in the cause of the dignity of Islam and its power and the dismissal of the enemy of the land of Lebanon. We see women in Lebanon, some of whom, three of their sons, have been martyred, but they still want to give their sons a chance to fight the enemy.

Sayyed Mustafa travels to Kuwait a year after starting the resistance movement against the Zionist regime, but is arrested there by the government of that country. The Kuwaiti government intended to execute him for it, but he was sentenced to imprisonment. Seven years after the capture of Sayyed Mustafa, Saddam invaded Kuwait.
When I heard this brother, I first laughed at her that she did not know who was directly involved in her release from prison, Sayyed Mustafa. Then I informed him of the role of Sayyed in the operation of the captive swap.
After the incident, the Zionists said: "We negotiated with a very clever person [on the Lebanese side]". At that time, they could not understand the real identity of Sayyed.
Subsequently, Sayyed, with the help of the Mujahideen and the security forces of the Islamic Resistance, managed to identify and destroy a large number of Zionist intelligence networks in Lebanon.
When the events of Syria came, hizbollah held meetings and meetings between the leaders of the Islamic Resistance to decide on the presence of the Islamic Resistance in this country to end the civil war and defend the shrine of Zaynab (SA) to be finally, the decision was made to hold the Islamic Resistance in Syria.
Following this decision, Sayyed Mustafa met with Sayyed Hassan Nasrallah and announced his readiness to attend Syria. He, as Sayyed Hassan announced at his funeral, was the chief of the Islamic Resistance Forces on the Syrian front, and for five years, since he was present in Syria until his martyrdom day.
At the same time, Sayyed went to Iraq to help "hashd-al-shabi” warriors fight Takfiri terrorists while investigating the situation [after the ISIL presence]. In addition, the transfer of military experiences to Yemeni combatants was also one of the things that Martyr Sayyed Mustafa did.


Tell us about your family experience with Martyr Sayyed Mustafa.
As for myself, I just say that the phrase is really thankful to God because I lived with this great man. As Hajj Qasem Soleimani told us at the commemoration ceremony of the martyr in Tehran, Seyyed Mostafa was a man of great value.
I and my family were constantly moving from house to house due to the security conditions of Sayyed. Although this is not a psychological state especially for the descendants of a family, my children never complained about this, but even my little girl always said: "It is important that the father has a good condition."
I remember that many years ago, when my little girl was 5 or 6 years old, we had to go to school to get to school because of the security conditions. When he returned from school, he was very tired and crippled.
When I saw this situation, I said to her: "Let I go, then we'll solve this problem." But my daughter answered, "No, lest you say to Dad, I have no problem, and it's important that everything be good to father!”
Although Sayyed, although very hard on the military, was extremely kind to the children, he was able to apply this harshness to his proper place. On the other hand, Sayed's treatment of our situation was such that he even paid attention to homework, even from inside the front and from the back of the phone.
Despite the fact that Sayyed Mustafa spent some time at home, these times were really helpful to everyone.
When my eldest daughter married, Sayyed did not go too far to make it possible for her to go home and her family to her bride and groom. All the time that Sayyed went to the house of her daughter and her husband was less than the number of fingers.
In one of the meetings that Sayyed had with our groom, he said, "Take care, never be in the world without a smile!" My son, after my testimony, told me, "There was little opportunity for me to meet with Sayyed, but at each visit I learned a lot from him.”After the martyrdom of Sayyed, our bridegroom began to serve the people and made a mosque and prayer room, and rewarded all of these to Sayyed.

How did you respond when you heard the news of Sayyed's martyrdom?
Sayed had contacted me two days before my martyrdom after the meeting. I had a mourning night at home, and I did not know that before us, the family of Hajj Emad (Haj emad's sister, martyr Sayyed Mustafa's wife) had been informed of the incident.
At the same time, my son called his cousin's house to ask for his cousin. As soon as the call came, he heard the sound of crying inside his home from the back of the phone, and he realized something happened. We guessed that Mostafa Mughniyeh, the son of Hajj Imad, who is a Mujahideen of Islamic Resistance, has been martyred.
We quickly left the house and went to Haj Emad's house, but when we arrived, we saw people gathered there. When they saw us, they began to express condescending condolences, and I realized that Sayyed had been martyred.
At this time, the only thing I did was to say: "O God, I wait for your gratitude and I submit." As Zainab (SA) asked God to accept his sacrifice, Imam Hussein (PBUH) I also asked God for Sayyed. God also granted Sid that honor to sacrifice his life for the protection of the holy shrine of Zainab (SA).

Why Does Israel Attack Gaza?

Shahed publishing to come out in Urdu