The following is the full text of the speech delivered on July 30, 2017 by Ayatollah Khamenei, the Supreme Leader of the Islamic Revolution, in a meeting with Hajj officials. 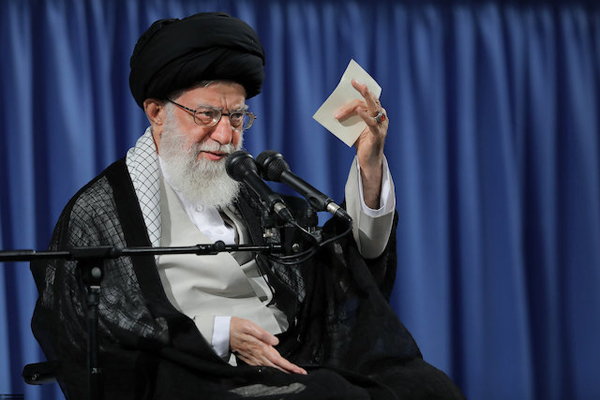 In the Name of Allah, the Beneficent, the Merciful

All praise is due to Allah, the Lord of the Worlds, and peace and greetings be upon our Master and Prophet, Ab-al-Qassem Al-Mustafa Muhammad, and upon his pure, immaculate and chosen household, especially the one remaining with Allah on earth

You are very welcome dear brothers and sisters, officials, staff and servants of hajj and hajj pilgrims. The fact that this year, the blessing to perform hajj has been provided for our people was good news. Thankfully, the officials of the country from the three branches of government and others who are involved in such affairs examined the different sides of the issue and decided that this year the hajj ceremony should be attended. I hope that Allah the Exalted will make this auspicious path a source of blessing, goodness, bliss and salvation for our dear people.

Hajj is a very important obligation. Perhaps, there is no obligation like hajj among the important Islamic obligations. First of all, there are numerous spiritual capacities in this great and extensive obligation. Those who pursue a spiritual relationship with God Almighty and who are after spirituality and the like can find numerous resources and astonishing capacities in this wajib [mandatory act in Islam] and this great obligation. Spirituality radiates and showers from daily prayers in hajj, from tawaf, from wuquf, from sayi, from ihram [different obligations that Muslims perform during hajj] and from each and every part of this great wajib which is a combination of different components.

If we appreciate the value of this and if we pursue spirituality, we will see that the capacity of hajj is a lot more than other obligations. This is another side of the issue. Moreover, there is a peerless social capacity in hajj as well. Notice that this is a special characteristic of Islamic obligations. Islam places a great emphasis on spirituality, but Islamic spirituality does not mean isolation, monasticism, seclusion and separation from people. A wajib and obligation which includes the most spiritual capacity includes the most social capacity as well.

Hajj is the manifestation of the great presence of the Islamic Ummah, of unity, of unanimity and of the power of the Islamic Ummah. Every year, the greatest gathering of the Ummah takes place in a particular location with clear and transparent circumstances. The Islamic Ummah shows off its presence through hajj. As well as this extrinsic aspect, there is an intrinsic aspect: during hajj, Muslim nations get familiar and establish a close relationship with one another. And they understand each other's language – by "language", I do not mean words, rather I mean the culture that dominates everyone's mind. They get familiar with this language and become close to one another.

This way, doubts and falsehoods are eliminated, enmities are undermined and gradually disappear, hearts get close to each other and hands come to one another's help. Countries can help one another. Nations can help one another. This is hajj. Now, to what extent those who are in charge of hajj help or allow hajj to be organized in this way, this is a different issue, but hajj is this: a peerless capacity for spirituality and for social presence, and a place for expressing one's beliefs and the positions of the Islamic Ummah.

This is the secret behind the issue of expressing one's hatred of the enemies, on which we have placed a great emphasis. Even our magnanimous Imam stated that he does not believe in hajj without this. In hajj, the Islamic Ummah can express its correct, unanimous and accepted positions. Unanimous and accepted by whom? By nations and by peoples! Governments might think and act otherwise. As we see, many Muslim governments are unfortunately taking a path which is different from the wishes of their nations, but the hearts of nations are different from governments. Hajj is a place where nations can express their positions on different matters.

Well, it is clear that the heart of the Islamic Ummah beats for Masjid al-Aqsa. This is the place for expressing one's position. Hajj is such a capacity. Hajj is this. Which place can the Islamic Ummah find which is better than Bayt-ullah al-Haram, Makkah, Madina, Arafat, Mash'ar and Mina for expressing what Muslims have to say, what they want and what they think about Palestine and about Masjid al-Aqsa? Which place is better than hajj?

Hajj has such a capacity. Where should we express our positions about the interferences of the US, its malicious presence in Islamic countries and in our region, and its effort to establish these takfiri, terrorist and other such groups? Of course, the most vicious terrorist apparatus is the United States of America itself. America itself is the most vicious terrorist. Hajj is the best place for the Islamic Ummah – all people and all countries – to express its positions and its beliefs. Hajj is such a capacity. This should be appreciated and pursued. This is one issue.

Another issue which is important and which was pointed out by the honorable gentlemen in the meeting – by both Mr. Qazi Askar and the honorable head of the Hajj Organization – is the issue of security: "Remember We made the House a place of assembly for men and a place of safety" [The Holy Quran, 2: 125]. This is the issue. The Holy Quran announces that God has made this place a place of gathering, assembly and security. Security is very important. The safety of hajj pilgrims is one of the most important issues.

We will not forget the bitter incidents that took place in the year 1394 [the incidents that led to the martyrdom of many Iranian and non-Iranian hajj pilgrims]. That incident created great sorrow in the heart of the Islamic Ummah and in the hearts of us Iranians. That incident is not forgettable! That wound cannot be healed. Of course, in that year, hajj officials made many efforts and worked very hard, but the incident was a catastrophic and grave incident anyway. The safety of hajj pilgrims falls on the shoulders of the country which is in charge of the Two Holy Mosques and which has power and control over it. It is that government that should preserve security.

The gentlemen in the meeting raised certain points which are completely correct. Well, you should be vigilant. You should be prepared for every incident that might occur. You should be prepared for every circumstance that might arise. The issue of hajj pilgrims' comfort and tranquility is very important. Of course, by security and safety, I do not mean that they should create an environment of strict security measures and exert security pressures in a way that hajj pilgrims will experience a difficult time. This is not what I mean. They should be safe and they should have peace of mind.

The catastrophic incidents of Masjid al-Haram and Mina should not be repeated and the memory of those incidents should not be rekindled. After all, there were certain concerns because of those incidents. Fortunately, the officials from the three honorable branches of government gathered in the Supreme National Security Council. They examined the different sides of the matter and they decided and concluded that the hajj ceremony should be attended this year. I hope that by Allah's favor, this hajj ceremony will be performed in the best way possible.

The issue of the unity of the Islamic Ummah should receive a lot of attention as well. Today, they are spending money – amounting to billions – in order to create discord and enmity among Islamic denominations. They are spending sums of money which amount to billions in order to do this. No one should help this discord be created. Anyone who helps has participated in their plots and in the otherworldly consequences of this great sin. No one should help this happen.

You should not spend your valuable time on these things. On the issue of hajj, hajj pilgrims should only think of purifying themselves and their hearts and souls so that they can achieve great spiritual results, God willing. If this happens, then social results will be achieved by Allah's favor as well.

I ask God to bestow His blessings and kindness on all our dear hajj pilgrims who will depart for hajj this year. I ask Him to bestow worldly and otherworldly protection on them. I also ask Allah the Exalted to bestow His blessings on the officials in charge of hajj affairs. Everyone should be vigilant and careful. Everyone should carry out their duties so that a great and dignified hajj ceremony – in the true sense of the word – will be held this hear, God willing.