After my marriage, we came to Tehran. When I was 28 I got the sixth grade of elementary and I decided to attend for university exam. Unfortunately, that year Mrs. Farokh Ro Parsa became minister and she forbidden me attending to university exam. 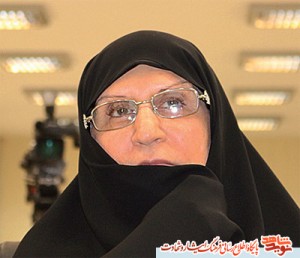 NAVID SHAHED: Seyede Zahra Mostafavi in her early life had especial interest on learning and she with this enthusiasm try hard for learning despite complicated political life of her father, limited condition for education of women before revolution and especial situation of Imam Khomeini’s family for establishing Islamic Republic, but finally she reached to high levels of education.

Her education life had many hardships. She several times was forced to course aside educating but finally she could recognize herself not only by title of Imam Khomeini’s daughter but also everyone knew her as a remarkable university educators in Philosophy field.

Her early life was passed in Qom and as she explained she passed elementary grades with a girl who worked in Maktab and she was coming to Imam’s house. Because in that times attendance of girls and clergies to Maktab Khane (elementary school) was not proper. Because of this reason and for the reason that she and her sisters not stay behind from learning, they spoke with a girl who work in a school and she came to their house and learn them. Seyede Zahra Mostafavi with this method learn until she became 11 years old. However, with marriage of this girl all classes became closed.

But this event didn’t stop her from educating and she learn a group of lessons at home and she wanted from the next-door girl to teach her English language. In this situation, she worked with Imam Khomeini and learnt "Jame’ Almoqadamat”.

However, when Zahra was born Imam was 38 years old. Imam in that time was a youth student and he was teaching "|Ethics” in Qom, classes that had many audiences in Feyziyeh and Imam’s concerns in this classes cause that Pahlavi regime transfer his classes to a small school. Seyede Zahra, the last daughter and the fifth child of Imam in this situation was born and in other words her birth was coincide with critical and revolutionary attempts of her father. Thoughts that for years were in Imam’s soul and mind and were merged in these years and this effected the life of the youngest Imam’s daughter. A girl who after the revolution till now, had more than other Imam’s daughters attempts in political fields of the country and this raised rumors that if wasn’t the prevention of Imam Khomeini she would attempt seriously in political activities. Of course, she rejected this rumor several times and her evidence also is her political rolling in recent decade.

However, Seyede Zahra Mostafavi had more interest in learning and educating rather than acting in political field and she prefer to be a narrator for oral life, thoughts and ideas of Imam Khomeini. A narration that is far from stereotypes.

Furthermore, the peaking Imam’s revolutionary activities cause her to stop her educating. The exile of Imam to Iraq and her marriage also contributed to the problem and stop her learnings.

But he started again in her 28th and as she said: "when after my marriage came to Tehran I was 28, I got the sixth grade of elementary and I decided to attend for university exam. Unfortunately, that year Mrs. Farokh Ro Parsa became minister and she forbidden me attending to university exam.”

Farokh Ro Parsa was the first woman national parliament’s member. She in second and third Hoveyda’s cabinet was the minister of Education.

However, her oppositions couldn’t stop Zahra Mostafavi because she six years later educated in night courses and got her diploma and then accepted in university:

"after getting my diploma I start my studying in theology but I was interested in philosophy also, because from my childhood I always protest to everything and ask many questions and for this reason I had a reasoning mind. My branch is Sadra Philosophy it means Transcendent Wisdom.”

Transcendent Wisdom is a philosophy that Mola Sadra codify it in this school of thought, in addition to Peripatetic Wisdom other components is become consider and today get attention among all philosophical school of thoughts. Other component of this school is mysticism. For the reason that Mola Sadra try to unify mysticism and philosophy and with getting near to wisdom reasoning and mystical understanding establish a philosophy with bases of mystical truths and revelations.

The other component of Peripatetic Wisdom is utilizing from Qur’anic verses and Hadith and thinking in divine words and Ma’sumin (PUT), this is means uniting scientific debates and philosophical reasoning with the revelation.

Educating of Seyede Zahra Mostafavi in this branch cause her to reach to the scientific high level, and she became favorite lady of 1390 and also got management of Kalam and Philosophy department of Tehran University. She published various articles in this branch.

Marriage and after that…

The trading history of Mahmoud Brojerdi’s family with Imam Khomeini’s family is from those days that Haj Ahmad Boroujerdi with Imam Khomeini were in a same class in Arak. As Imam’s daughter was saying, Imam leave the decision of marriage to herself. When she was 19 the story of marriage raised in 1340. She had 4 suitors in that days and Mahmoud Boroujerdi was the fifth one. Zahra Mostafavi narrated: "I had a suitor who came from Tehran, I saw him and he was suitable and his job also was good. In that days Imam said to me that this man and Boroujerdi also are your suitors and I said if I suppose to get marry this one is better. He worth more and Imam said: "ok, if you are agreed there is no problem” and he accepted.

Mahmoud Boroujerdi was son of the late Haj Sheikh Muhammad Hussein Boroujerdi and grandsons of the late Ayatollah Haj Mirza Mehdi Boroujerdi. He also passed his primary education in Qom and got his BA, MA and PHD degree in theology from Tehran University. From 1331 started teaching in various degrees from elementary courses till university and after Islamic Revolution had different responsibilities. Moreover, Dr. Boroujerdi before the revolution as a literature and theology teacher tried to promoting Islamic principles and he hadn’t public political activities but in many occasions, he transferred Imam’s secret massages and other scholars.

He had various position including ministry of Education, the deputy of foreign ministry in Rajaee’s cabinet, the deputy of Ministry of Culture, the Directorate of human Science Research of Islamic Republic of Iran’s Embassy in Fenland and supervisor of dialogue of civilizations international center in Eslahat government. Furthermore, he always attempt for making links between scholars and art and culture artists with Islamic regime.

Imam Khomeini about him said: "I knew Mahmoud from his childhood and I believed in his beliefs and honesty.” The last son -in -law of Imam which, was known with humility, sociable and hosted, after suffering a sickness passed away in Lale hospital in 7th of Tir of 1389. He was 7 years elder than Zahra Mostafavi and when he was 27 old married with Zahra Mostafavi and in their wedding ceremony the groom gifted a neckless and a ring to the bride.

The result of this marriage was two children with names of Leili and Masih. Leili was married with a son of Ayatollah Tabatabaee and had two girls and Masih is one of famous teachers of Huze.

As Zahra Mostafavi said in an interview with "the sound of memory”, her childhood was full of mischief and Imam called her "the coup girl”. She said: "in our house, Imam liked Abgousht and most of times we had Abgousht and I didn’t like this food. One day, we were in Qom house and I had Gousht Kubide in my hands and Imam was getting Vouzo and I was upset for having this food and I threw the Gousht Kubide and said to Imam that why we must eat this food every day? We are several people in this house and must notice to view of everyone. He didn’t say anything to me that day but he was say to my mother that cook a food with taste of each child every day. Then he told me you did a coup.

Zahra Mostafavi said in another place: "my brother were 10 years older than me and he for this reason commanded me. Because I was a bit mischief I didn’t obey his commands. One day while Imam was sit, told me to bring a glass of water for him. I said: "I don’t want”. He became upset and he wanted to bit me and I run away with support of Imam. Then my brother said to Imam that it is because of you that she didn’t respect me. Imam said: "today you are saying to your sister that give me a glass of water probably tomorrow would want her to pair your shoes.

Perhaps his open mood let her not only pass all high levels of education but also, she was the head of Iran's population in defending from Palestine and also the Secretary General of the International Union of Palestinian NGOs. She in this positions illustrated Imam Khomeini’s point of view through Palestine and explained the necessity of defending from Palestine’s resistance.

Seyede Zahra Mostafavi also as Secretary General of Iranian women gathered all political, academic and cultural women. Perhaps we could see Seyede Zahra Mostafavi’s life as a representation of Imam Khomeini’s view about women. His view was innovation and intellectual that even now is not become understand.

A review on her workbook

Dr. Zahra Mostafavi is the most famous daughter of Imam Khomeini in politics and society. She is the secretary General of the association of women, General Secretary of the Society for the Defense of the Palestinian Nation, had PHD in Theology and Faculty member of Theology university of Tehran (Kalam and Islamic Philosophy department).

PHD in Philosophy and Islamic wisdom from Tehran University in 1374.

Teaching Philosophy, Logic, Kalam, the essentials of training in Islam, the philosophy of ethics and…

Researching in some issues of Kalam and Philosophy.

Theoretical of ethic and Islamic trainings

Water of life in the dark

Secretary General of the female population of the Islamic Republic

Head of Department of Philosophy and Islamic wisdom

Member of the editorial board of the Journal of Neda

Member of the Islamic Conference

Member of the editorial board of the Journal (academic-researching) of Metaphysics, the college of literature and sciences.

“Index dictionary of martyrs”, the most important research source in life of martyrs