US, Soviets, and regional reactionaries fought against us for 8 years, we defeated them all: Ayatollah Khamenei

Do not let the miraculous event of the Holy Defense be forgotten; some are motivated to weaken this feature in the reality of our lives and our minds. 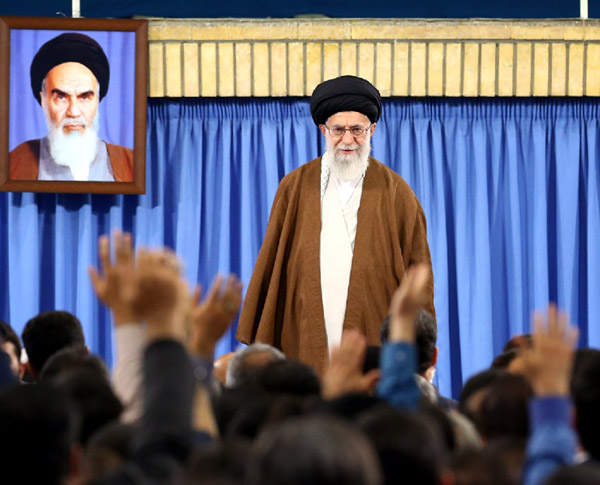 Today, (Wednesday) during a meeting with a group of commanders, veterans, artists and memorial organizers of the holy defense era, Ayatollah Khamenei, the Supreme Leader of the Islamic Revolution, said, "Depicting memories of the eight year imposed war and the use of artistic, literary, and innovative methods in order to transfer them on to newer generations is highly prized and important."

He stressed, "When there is true faith within the heart and trust in God, even mountains cannot resist against will-power."

Mentioning that during the imposed war, all world powers including US, NATO, the USSR and reactionaries of region were opposed to the Islamic Revolution, he added, "In such circumstances, we were able to overcome all these powers. Are these experiences not enough for our peace of mind and confidence?"

Noting the very difficult situation at the begining of the imposed war, Ayatollah Khamenei said: From the autumn of 1980 until the spring of 1981, there was a dire situation regarding the war--our military equipment and forces were in a very bad state. At the same time, the enemy had reached within 10 Km of Ahwaz. But with trust in God, recognition of their strengths and building on them, our commanders and soldiers were able to turn tables. And, in the spring of 1982, two major operations--Fath al mobin and Beyt al Moghaddas--were carried out, resulting in the capture Baathist invaders by the thousands, the reclaiming of large areas of Iranian territory, and the liberation of Khorramshahr.Pointing to a verse of the Holy Quran stating that we should not let sadness and lethargy enter our hearts, the Leader of the Islamic Revolution insisted, "If we truly believe in God and trust in Him, we can overcome all hardships and challenges as believers."

"Do not let the miraculous event of the Holy Defense be forgotten; some are motivated to weaken this feature in the reality of our lives and our minds, those who plan for Islamic countries and oblige them, and they agree to remove the issue of jihad and martyrdom from the curriculums of religious education, schools and universities; this has been ordered. They have been told to remove the issue of jihad and martyrdom, and they have agreed and felt obliged to," added Ayatollah Khamenei.

His Eminence furthur held that, "The same motives thrive in the country and can be seen through some cultural policies. They should not be ignored. Keep the Holy Defense era and martyrdom alive."

Ayatollah Khamenei continued, "The Holy Defense, jihad and martyrdom must be cherrished, so that this generation joins the one that created the summit of history during the Holy Defense.

Video: How can one achieve martyrdom? Ayatollah Khamenei explains

Martyr "Agharebparast" according to the Supreme Leader

We are looking forward to Hajj Ahmad Motovasselian’s return