On the occasion of Iran’s National Day of Martyr, the spokesman for the Legal and International Commission of the Secretariat for Shahed and Veterans Organizations. 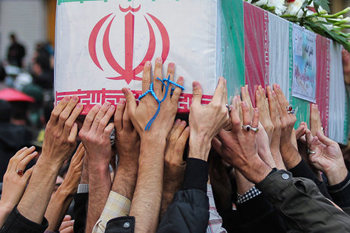 On the occasion of Iran’s National Day of Martyr, the spokesman for the Legal and International Commission of the Secretariat for Shahed and Veterans Organizations, Alireza Rajaei published a commentary in which respected the memory of Imposed War martyrs.

Here is the full text of his commentary:

The late Imam Khomeini as the leader and model of the martyrs of the glorious Islamic Revolution of 1979 undertook a great role in commanding and leading the martyrdom-seeking forces and revival of the culture of independence and freedom of Iran.

The martyrdom-seeking culture through creation of an inner change in the society, individual, religious and, social ethics oriented people towards awareness, growth, and dynamism. Having created an intellectual and spiritual change inside the society, it gave a kind of dynamism to the deterring defensive diplomacy as well.

Following the unfair aggression of Iraq against Iran and the plot of other countries in the world in 1980, Iran underwent attack after the Islamic Revolution of 1979. In that unequal war, thousands of martyrs and war disabled donated their life for the sake of the defense of the country. This wave of freedom and independency seeking had roots in the defensive idea of the late Imam Khomeini and through martyrdom, the truthfulness and innocence of Iran became clear to the international public opinion such that through the world relearning of the lofty ideals and sacred objectives of the revolution, the free and freedom seeking nations could learn about the human and divine values of the movement.

The spirit and solid will of truth-seeking people and those pursuing martyrdom, unity and revolutionary determination of the people caused the victory of blood over the sword and superiority of the arm of faith over the material arms of the regional and world powers.

The participatory culture of the Muslims and other monotheistic religions of the Twenty Million Army with reliance upon optional and informed amity prevented the enemies of Iran from any thought of attack because the element of awareness of the death makes the brave men to face the aggressors.

Considering the inability of the enemy to dominate the spirit and heart of these devoted warriors, has forced the enemy to accept an immense cost vis-a-vis a slight benefit and will deter it from invading our land.

In the international scene, various mechanisms are used to deter of which the most important ones is the method of defensive diplomacy. This type of diplomacy is in fact, the application of defensive policy in diplomacy scene. Using this instrument, the defense section will supply the benefits and objectives of the political system with the help of defense domain and without application of hard power.

In any situation, having an ideal and smart defensive diplomacy is certainly one of the most important mechanisms to establish and expand security and in particular, the soft security in each country. Having such a valuable gem, it is possible to take a step in line with the concerned goals, present suitable approaches in mutual trust building with the neighboring and world countries which hold a homogenous approach.

May the name and memory of thousands of martyrs and veterans be everlasting.

Chess with the Doomsday Machine’; a bestseller

For the Martyrdom Anniversary of Martyr Madani, the 2nd Mihrab Martyr