The enemy, U.S. or greater, can't do a single thing: Imam Khamenei 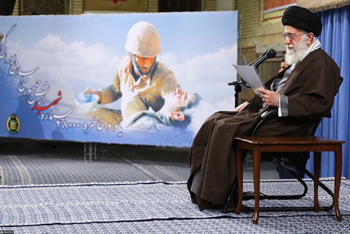 On the commemoration day of the army, a group of IRI's army commanders and staff met with Ayatollah Khamenei --the commander-in-chief-- this morning (Wednesday) April 19, 2017.

His Eminence added: "If this is achieved—which God willing it will happen by His grace, despite how the enemies and the mainstream media tries to spoil the results of the elections, in some way or another— if the Iranian nation continues to take part in the elections with vigilance and awareness, as they always have, then a massive, lucid election, coupled with enthusiasm and eagerness, as well as health and safety will be held, and this will be a significant resource for the country which will safeguard it."

Ayatollah Khamenei stated: "I highlighted economic slogans over the past two-three years, because I felt the enemy sought to strike a blow against this great national system by targeting our economy. When we have economic problems, various sectors of the establishment will not be able to carry out their tasks properly; hence, we need to see what the top priorities are in order to address them adequately, one at a time, when it comes to the officials’ set of duties."

Ayatollah Khamenei made the point that if the officials look at the enemy’s motives, they may gain motivation to work harder, further stating, "When we hear what the enemies say and examine their words we realize that they stress on the same points, so that they can use weaknesses and flaws to sabotage others and exert harm.
Ayatollah Khamenei said: The invasive superpowers’ technique is to threaten and bully. We have reiterated this fact several times. The invasive powers want to interfere everywhere. They overestimate themselves, they threaten and frown upon others. Remember the aggressiveness that previous US administrations would pose? And now, too, they do the same, but in a different manner.
Ayatollah Khamenei further asserted: "The worst situation for a country is that the officials fear the enemy’s threats and bullying techniques. If they fear them, they have actually opened up a way for the enemy’s invasion and aggression. Tasks should be done with wisdom, logic and prudence—there is no doubt about that—but they should also be done courageously. Fearing or worrying, or becoming affected by the threats, frowns, and mistreatment that arises from the world's superpowers, is just the beginning of [a country's] misery."
"If there is an official who fears the superpowers in his heart, then it is up to him, but he has no right to talk on behalf of the people and say our people are fearful. The nation is standing. Had the nation not stood firm, since 1979 to this day, there would be no trace of Iran or Iranian left," he asserted.
Ayatollah Khamenei further stated: "The enemies--whether the United States or greater than the United States--cannot do a single thing against an establishment that is linked to its people, an establishment that has admiration for it's people and the people admire it back."
S: khamemi.ir
Related News

It felt like Martyr Aviny had walked the paths of heaven: Ayatollah Khamenei