A Review of UN Resolution 598

Navideshahed: The Resolution 598 was the 8th resolution that the Security Council of United Nations issued from the beginning of Iran-Iraq war. This resolution was adopted by the Islamic Republic of Iran on July 18, 1988. The following article attempts to consider the anniversary of UN Resolution 598 and the procedure of its approval. 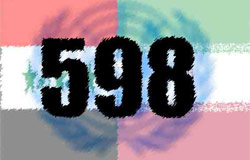 Based on a Navideshahed report, on July 17, 1988, then-president Ayatollah Ali Khamenei from Iran sent a letter to Javier Pérez de Cuéllar, the former UN Secretary General.

In this letter, the Islamic Republic of Iran officially accepted the Security Council Resolution 598 regarding the imposed war.

Part of the letter reads:
As you know it so well, the fire of the war that was started against the Islamic Republic of Iran on September 22, 1980 by the Iraqi Baathist regime has been spread to some imaginable dimensions that had caused damages for other countries and even the innocent civilians.

The massacre of 298 innocent people to shot down the Iranian Airbus airplane by one of the warships of the United States on the Persian Gulf is an obvious sample in this field. Under such condition, your efforts for implementation of Resolution 598 (1987) is really significant and important.

The Islamic Republic of Iran has always attempted to collaborate and cooperate with you. In this field we decided to adopt the Resolution 598 due to the importance of humans’ lives and settling justice, peace and security nationally and internationally.

The Security Council on October 3, 1986 started the discussion of Iran-Iraq war once again based on the application of Arab Union. The Secretary General mentioned that the objective and goal of holding these sessions is to consider the military operations of current year, the increase of attacks to trade ships of third party governments and the expansion of war zones, threats of regional countries and the certain decision of Iran that has announced it aims to arrange a great military operation. As a result the Security Council issued the resolution 588 on October 8, 1986. It should be mentioned that despite of this issue that six years had passed from the beginning of war and Iraq’s invasion against Iran and this invasion had become confirmed by many countries, but still it issued the resolution between Iran and Iraq.

After the report of the Secretary General, the Security Council entered the session and it issued a statement in which resolution the disputes by peaceful methods and the deep concerns for expansion of conflicts by increasing the attacks against non-military targets specially the trade and business ships and oil facilities of coastal countries.

The work of this group was done confidentially. Eventually the result of their considerations within five months was writing a draft for the Resolution 598.

After preparing a draft for the resolution 589, the session of the Security Council was held on July 20, 1987.

For the first time seven foreign ministers from the countries of United States, United Kingdom, France, West Germany, Italy, Argentina and UAE and the vice-duty of Japan’s foreign minister took part in this session.  This session was held by the chairmanship of John Barnar Rimon, the foreign minister of France and it was titled "The situation of Iran-Iraq war”. Before voting in this field, the representatives of China, United Arab Emirates, UK, USA, Republic of West Germany, Italy, Ghana, Zambia, Argentina , Congo, Venezuela and France talked about this important issue and after the adoption of the resolution,  the UN Secretary General and representatives of the former Soviet Union, Japan and Bulgaria spoke.

The text of this resolution is as follows:

Deeply concerned that, despite its calls for a cease-fire, the conflict between Iran and Iraq continues unabated, with further heavy loss of human life and material destruction,

Deploring the initiation and continuation of the conflict,

Deploring also the bombing of purely civilian population centers, attacks on neutral shipping or civilian aircraft, the violation of international humanitarian law and other laws of armed conflict, and, in particular, the use of chemical weapons contrary to obligations under the 1925 Geneva Protocol,

Deeply concerned that further escalation and widening of the conflict may take place,

Determined to bring to an end all military actions between Iran and Iraq,

Convinced that a comprehensive, just, honorable and durable settlement should be achieved between Iran and Iraq,

Recalling the provisions of the Charter of the United Nations and in particular the obligation of all member states to settle their international disputes by peaceful means in such a manner that international peace and security and justice are not endangered,

Determining that, there exists a breach of the peace as regards the conflict between Iran and Iraq,

Acting under Articles 39 and 40 of the Charter of the United Nations,

1. Demands that, as a first step towards a negotiated settlement, Iran and Iraq observe an immediate cease-fire, discontinue all military actions on land, at sea and in the air, and withdraw all forces to the internationally recognized boundaries without delay;
2. Requests the Secretary-General to dispatch a team of United Nations Observers to verify, confirm and supervise the cease-fire and withdrawal and further requests the Secretary-General to make the necessary arrangements in consultation with the Parties and to submit a report thereon to the Security Council;
3. Urges that prisoners of war be released and repatriated without delay after the cessation of active hostilities in accordance with the Third Geneva Convention of 12 August 1949;2
4. Calls upon Iran and Iraq to cooperate with the Secretary- General in implementing this resolution and in mediation efforts to achieve a comprehensive, just and honourable settlement, acceptable to both sides, of all outstanding issues in accordance with the principles contained in the Charter of the United Nations;
5. Calls upon all other States to exercise the utmost restraint and to refrain from any act which may lead to further escalation and widening of the conflict and thus to facilitate the implementation of the present resolution;
6. Requests the Secretary-General to explore, in consultation with Iran and Iraq, the question of entrusting an impartial body with inquiring into responsibility for the conflict and to report to the Security Council as soon as possible;
7. Recognizes the magnitude of the damage inflicted during the conflict and the need for reconstruction efforts, with appropriate international assistance, once the conflict is ended and, in this regard, requests the Secretary-General to assign a team of experts to study the question of reconstruction and to report to the Security Council;
8. Further requests the Secretary-General to examine in consultation with Iran and Iraq and with other states of the region measures to enhance the security and stability of the region;
9. Requests the Secretary-General to keep the Security Council informed on the implementation of this resolution;
10. Decides to meet again as necessary to consider further steps to insure compliance with this resolution.

After approving the resolution, the Secretary General in the same session of the Security Council gave speech as follows:

The resolution that was approved is the climax of the joint efforts of the Security Council Members as delegates of the international community. They presented this resolution to provide a comprehensive and honorable resolution for the conflicts between Iran and Iraq. To end the war in the region it is necessary that the national policies of the entire member states of the Security Council to be coordinated with the announced ambitions of the Security Council. So in this regards, the executive paragraph number 5 of the resolution consists of a joint responsibility for all the member states of the United Nations. An essential step was taken by consultation of two countries and other countries of the region for settlement of peace and security in the region. Regarding the issue of conflict and tis responsibility soon a neutral committee will be established by agreement of both sides to consider the issue and the main goal… lets cooperate with each other. You are the member states of the Security Council, Iran and Iraq and I as a Secretary General of United Nations should cooperate with each other. On July 18, 1988, the Islamic Republic of Iran adopted the Resolution 598 of United Nations to prove its good ambitions for the eight year war of Sacred Defense Era and to make the aggressive enemy to condescend in the framework of international law.

The famous 1975 Algiers Agreement that would emphasize on the territories of both countries was the most important issue that the Islamic Republic of Iran stressed on it and it asked the Iraqi regime to be committed to this contract.

Despite of adopting the Resolution 598 by the Islamic Republic of Iran, still the invasion nature of the enemy was observed in the battlefields. Once again the armed forces of Iraq by benefiting from the hired militants invaded the Iranian territories and they did another attack against the cities and villages of Iran. One of the reasons that that caused the Iraqi Baathist regime to invade Iranian territories was due to disputes over the territories that had been determined in 1975 Algiers Agreement.

After passing eight years from the unequal war that all the territories of Iraq were under threats, the United States of America and the other allies of the Iraqi Baathist regime entered the war. Imam Khomeini, the founder of Islamic Republic of Iran by considering the interests of the country and by realizing the expanded conspiracies of the United States of America and western countries to suppress the Islamic Revolution and Muslims of the Islamic Iran after consultation with senior commanders of the country, he adopted the Resolution 598 of Security Council. The Security Council of the United Nations asked both countries (Iran and Iraq) for ceasefire.

The Islamic Republic of Iran due to the positive measurements of some of the contents of this resolution specially the articles related to introducing the invader and paying compensation and indemnity by the invader announced its agreement for the resolution.

The Security Council approved the resolution 619 on August 09, 1988. According to the resolution, the military inspectors from Iran and Iraq and United Nations that were about 400 persons who belonged to 25 different countries stationed in both countries.