A brief reflection in the life of the shining personalities in the history of the Islamic revolution indicates that their life have always been in the reviving of Noble Islam and Allah`s order and they even devoted their souls in this way.
One of these brave fighters is the highly respected martyr Ayatollah Madani who devoted his springtime to Martyr Navab Safavi to oppose the deviance group of kasravi and Despite suffering tuberculoses, both in prison or exiled, he never left fighting and publicizing to the last minute of his life and he sloughed the tyrant regime. He finally
irrigated the blessed tree of the Islamic revolution by devoting his own blood. Great Martyr Madani lost his respected mother when he was only 4 years old. He also lost his father at the age of 16. He left his home town to Qom to enjoy the presence of the great masters such as Ayatollah Mohammad Taghi Khansari and Ayatollah Kooh Kamari in the religious school of Qom (Hozeh Elmiye) and enjoying the theosophy and philosophy in Imam Khomeini classes. He
left for Holy Najaf to continue his studies and became a very famous master in Najaf and got his Ijtehad Degree from great Ayatollahs such as Ayatollah Hakim, Ayatollah Khansari and Ayatollah Kooh Kamari. 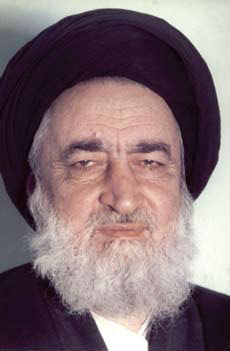 In his springtime, martyr Madani started fighting the corrupted Baha’i sect. Pahlavi regime hadmade this sect and their related capitalists freehanded all over Iran and especially in Azerbaijan region to repress Islam so that they could take the control over some of the electricity companies. Martyr Madani cleaned Azarshahr from this corrupted sect by his divulging speech and banning the business with this deviated sect.
1963), he was the first one to follow Imam(In 1342 Khomeini (PBOH) in Najaf and had a great role in broadcasting Ayatollah hakim in this regard.
During Abdosalam Aref ruling (in Iraq), Ayatollah Hakim adjudged on the atheism of communism for which he was humiliated by Iraqi regime and he left for Koofeh to show his objection. Martyr Madani gathered the religious scholars, they all wore grave clothes and went to Ayatollah hakim`s house and asked him to adjudge for Jihad.
Martyr Madani moved to Khoramabad in 1350 (1961) to teach Islamic lessons. He opened Kamalieh religious school (Hozeh Elmieh) there. Then he was exiled to other cities such as Noorabad Mamasani, Gonbad Kavoos, Bandar Kangan and Mahabad due to his activate against the Shah regime. After the triumph of the Islamic Revolution, he returned to Qom city and left for Hamadan after being invited by people of Hamadan. During the constitution of Khebregan Council he was elected by people of Hamadan and had a vital role in approving Velayat Faghih (governing of jurisconsult).
After martyrdom of martyr Ghazi Tabatabei, Imam Khomeini appoint ted him as the Friday Imam to divulge the opportunists, Liberals and feudist members. He diffused their plots and guarded the Islamic revolution.
During his life, he never forgot being naïve and he always fought nobleness moralities. For this reason, all the enemy`s plots to destruct him was mirage. He paid great attention to piety and self refinement. He believed the overcoming the enemy would be only done through self refinement and edification.

As Imam says, he was an eminence scientist and ateacher ofmorality and idealism who never stopped fighting oppressors. He totally secluded the anti revolutionists and feudists and rested on the highest position he deserved, the position which was the continuation of the red line of martyrdom and Imam Ali(PBOH) an his respected family and a trust of the Prophet family(PBOH) and their real followers.
Related News

The martyrdom of Navab Safavi and his followers