The latest issue of the historical – cultural monthly magazine published with the title of “the Soldier of Guardianship” to the memory of martyr Haj Qassem Soleimani by the effort of Shahed magazine Group. 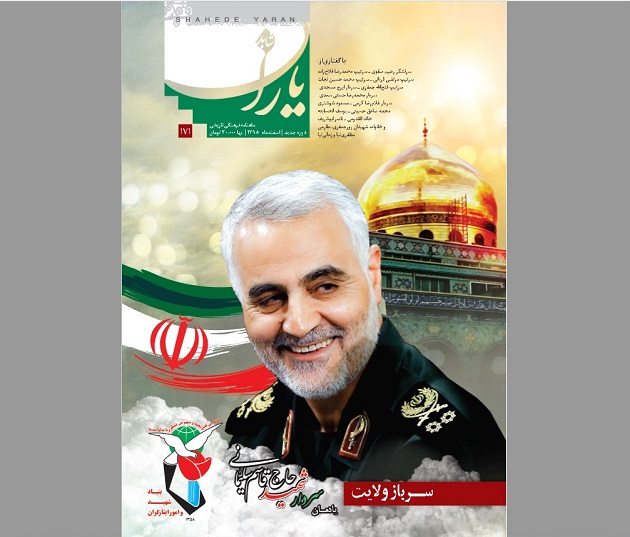 Navideshahed: the latest number of Shahed Yaran monthly magazine published with the title of "Soldier of Guardianship” to the memory of "Haj Qassem Soleimani”.
In the following magazine we will read speeches from "General Rahim Safavi”, "brigadier General Mohammad Reza Fallah Zadeh”, "brigadier General Morteza Ghorbani”, "brigadier General Mohammad Hussain Nejat”, "brigadier General Fatollah Jafari”, "General Iraj Mahdavi”, "General Mohammad Reza Hasani Saadi”, "General Gholam Reza Karami”, "Masoud Shooshtari”, "Mohammad Sadegh Hosseini”, "Khaled al-Alghodoumi”, "Naser Abousharif”, "Taremi”, "Mozafari Nia” and "Zamani Nia”.
These are some titles that you can read in this issues: "martyr Qassem Soleimani from birth to martyrdom”, "Haj Qassem Soleimani in the narration of his children”, "Haj Qassem, the symbol of Issar and Resistance”, "Haj Qassem, the brave commander”, "the martyrdom of Haj Qassem made the Iranian nation and Iraqi nation more united”, "he was General Qassem Soleimani who had shown us the photo of Imam”, "letter of Haj Qassem to the Supreme Leader about the  destruction of  ISIS” and "oh my Lord accept me as the martyr”.
The latest issue of Shahed Yaran monthly magazine published with the price of 30,000 Toman by Shahed Magazines Group. Rahim Narimani is the editorial in chief of the recent monthly magazine and Fatemeh Rezaei is the administration manager of the magazine.
To buy the magazine visit mag.navideshahed.com or you can call us on 88823584.
Message End/