His family did not know that he was a commander until his martyrdom time. 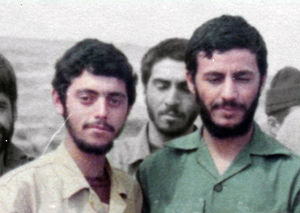 According to Epic and Resistance Group of Fars News Agency (Tavana Club), Mohsen got prepared to get married in June 1983 based on the offer of his friends. He thought that no one can be a good wife for him except the sister of martyr Ali Reza Nahidi. Mohsen engaged his spouse in order to start a life based on the educational and religious percepts of Islam.

After marriage, Mohsen took his wife to west Islam Abad city in order his family to test the coldness and warmness of war along with him. Their common life which did not last for more than a month in itself had thousands of points. The spouse of martyr Noorani whose sister had been previously captured by the Iraqi Baathist forces in Abadan and her brother ‘Ali Reza’ had been martyred during the military operation ‘Valfajr Moghadamti’.

Mrs. Nahidi, the spouse of the respectful martyr ‘Mohsen Noorani’ regarding her marriage with Mohsen says: "We went to west Islam Abad city after our marriage so immediately and we resided there. He left me at home and he went to the frontiers. He came back home after a week. He had a strange condition and it was really surprising for me. It was clear that he was so sad.”

The night prayers of Mohsen had a special condition; although he was only 20 years old, but he would worship God and ask God to grant him martyrdom in a way that any listener and hearer would be surprised and his/her heart would shake.”

When he came home for the last time, it was 2:00 o’clock at midnight despite of much tiredness and when his spouse to him that he should rest for a bit, because in the morning he is supposed to go to the frontiers, but he smiled and he said: "No, I would like to talk with you for a few minutes.”

At that night Mohsen dyed his hands with Henna and he had used a very good perfume.

His spouse told him: "I never forget the final time that I saw my brother. When he would talk, I would feel something strange. Right now that you are talking with me, I have the same feelings.”

When she started at Mohsen’s eyes, she observed that he was looking at a spot and he was thinking so deeply. He was crying in tears. He slowly said: "Oh God really wants met to be martyred? Do I really deserve to be martyred?”

When he expressed these words, his spouse also started crying in tears and Mohsen got so surprised and he said: "I really expected you do tolerate more than this, what is wrong? Where was the morale that you had after the martyrdom of Ali Reza?”

Mohsen sighed and he said: "Thanks God that he has helped me from the beginning of my life until now…”

He also asked his wife not to cry in the funeral procession of him in front of the people and not to wear black clothes and she must make the enemies of Islam understand that how powerful Islam is. We are nothing, but also this Islam empowers us. You should always try to be the same as her Excellency Zeinab Kubra (S) who was so stable and strong and patient after the martyrdom of Imam Hussein (AS)…

Each time that Mohsen would go to Tehran from the battlefields, when his mother would see him, she would tell him: "Thanks God that you have returned successfully and in a healthy condition…” Since he would be sad of these words, he would say: "You should be proud of yourself if I get martyred in this way and that he is feeling so bad when others are being martyred and ….Isn’t martyrdom as a pride for you? We must fight against the enemy until the time that we get the victory or to be martyred. This era is the same as the era of Imam Hussein (AS)…”

When they informed Nahidi about the martyrdom of Ali Reza, the mother of Mohsen started crying in tears and Mohsen told her: "Martyrdom is a pride and you should be prepared, because someday they might bring the martyrdom news of me as well…”

When his mother in response said: "God willing you will be successful”, Mohen responded: "We will fight until the time that we are alive and if God wants we will be martyred.”

Mohsen was also one of the commanders that his family noticed that he was a brigade commander when he was martyred. A few days after the ambush that had been made by the hired agents against the Zolfaghar brigade commanders, Mohsen Noorani and Mohammad Taghi Pakuk were martyred.