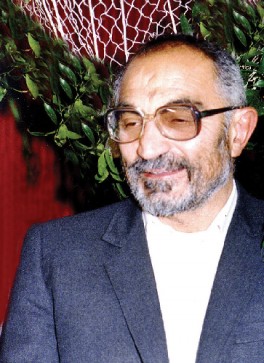 Navideshahed – the 21st memorial ceremony of the martyr Sayyed Asadollah Lajevardi held at the hall of the martyrs of 7th of Tir (shohadaye haftome tir). The ceremony held with the presence of military authorities, martyr’s friends and the public people.
Seyyed Asadollah Lajevardi was born in a very religious family who lived in southern Tehran in 1934. His father Seyyed Ali Akbar acquainted his son with Islam and Quran from the very early years.
As martyr Lajevardi played an important role in demonstrations and political activities against Pahlavi dictatorship, he was repeatedly arrested and prosecuted by SAVAK and was many times sent to prison where he experienced very harsh tortures.
He was the first to talk about Mojahedin-e Khalq corruption while in prison. During the era called as "prison in prison” because in prison he was boycotted by the elements of MKO.
After the victory of the Islamic Revolution martyr Lajevardi was appointed the Islamic Revolution Prosecutor General. After that he became the director of the organization for prisons. Seyyed Asadollah Lajevardi was finally targeted and killed by MKO terrorist elements on August 23, 1998 while he was working in his shop in Ja’afari Bazaar in Tehran.