A review of America’s imperialist policies

The American imperialism has been part and parcel of this country from the access of Europeans to the land of Indians to the age of slavery and up to the independence and the current time. 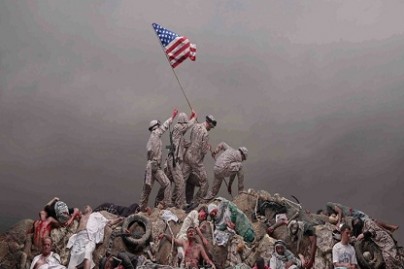 As it was said earlier, America was formed on the basis of the sovereignty of a group of Europeans on the land of Indians in the Western hemisphere and then with the prevalence of slavery. The united states of America was first formed with 13 states and then found rule over other states to become 51 states in general that we have now. Also, after forming an independent government, Americans based their foreign policy on sovereignty. However, this policy of America can be categorized into four eras: one of seclusion, between the two world wars, the cold war, and the super power era. Here we discuss the first two.

The American seclusion era was formed on the ideas of Monroe, fifth US president. In the year 1823, Monroe in a statement to the congress outlined the United States’ foreign policy. The statement was adopted as the basis of the United States’ foreign policy for about one century. Monroe’s doctrine in no way was equal to non- interference of the US in domestic affairs of other countries. The US had started as a country by interfering in other countries’ affairs. Monroe’s doctrine stressed that the US would only interfere in the western hemisphere or the Americas, and would refrain from interference in Europe. The major principles behind that policy can be said to be:

First, the US did not yet possess a national power influential beyond the continent.

Second, at that time, Europe was the scene of internal wars and lacked interests for the upstart united states which had just freed itself from the colonialism of the UK. So, the national interests of the US would have the officials to stay away from European wars and focus on building their country.

Third, the US as of that time lacked internal security, as witnessed by domestic conflicts and wars.

Fourth, the US was afraid of European countries’ interference in the American continent.

Some authors believe that the objective of the Monroe doctrine was the worry that maybe with the end of Napoleon’s wars, the sacred union would help the re- establishment of the Spanish empire by suppressing the upstart republics of Latin America. Therefore, some have interpreted the doctrine as: Europeans, do not interfere in Latin America. This area belongs to the United States. But some Muslim scholars believe that the doctrine was formed in reaction to request by the people of Greece from the US to help them against the Ottoman Empire. Americans did not want to lose their interests that lied in relations with Muslims. However, America’s aids was sent to Greece under the name of humanitarian aid.

The era can be summarized in two periods:

A. The second half of the 19th century:

During this period, the US tried to knock out other colonial powers in the Western hemisphere with the rubric of democracy. It so managed to expand its frontiers and secure them. In this period which contained the economic growth of the US, the country tried to take over some islands in the Pacific Ocean in order to secure its shipping lines and reach fuel to the ships.

This is a list of US violation of other countries in this period:

US war with Mexico: in 1846, the US called war on Mexico with majority votes from the congress. After two years of war, last lands of Mexico, including California as well as all or part of today’s Nevada, Utah, Arizona, Wyoming, Colorado, and New Mexico were taken by the United States.

US war with Nicaragua:

In the year 1854, the US bombarded Nicaragua with its Navy. Three years later, it once more bombarded the country with the alibi that an American had been wounded there. After another year, the US forced Nicaragua into accepting the Cass-Irisarri treaty. According to the treaty, the US was given permission to traffic Nicaragua and interfere with the affairs of that country.

US attack on Honduras: the US attacked Honduras in 1860.

US policy in Alaska: in 1867, the US bought Alaska from Russia and make it its biggest state.

US interference in the Peru- Chile war: in 1881, the US supported Peru in its war with Chile. In return, it took over Chimput port as base for the Navy, along coal mines and a railroad.

The US and the siege of Pearl Harbor: in 1887, the US took over Pearl Harbor island as a protectorate island, then turned it into a maritime base for guarding its trade.

The US and interfering in Cuba: in 1898, Spain had lost most of its colonized countries in Americas. Cuba and Porto Rico were still colonized. Cuba was the scene of civil wars for freedom. The US entered the scene with democratic mottos, taking over Cuba, Porto Rico, and Guam. They also took the Philippines from Spain by paying $20 million.  Cuba was made independent, but only on paper, as it was under military siege by the US up to 1902.