Iran will vigorously continue to boost its military power, President Hassan Rouhani underlined, stressing that the country will never ask permission from anybody for the development of its missile capabilities. 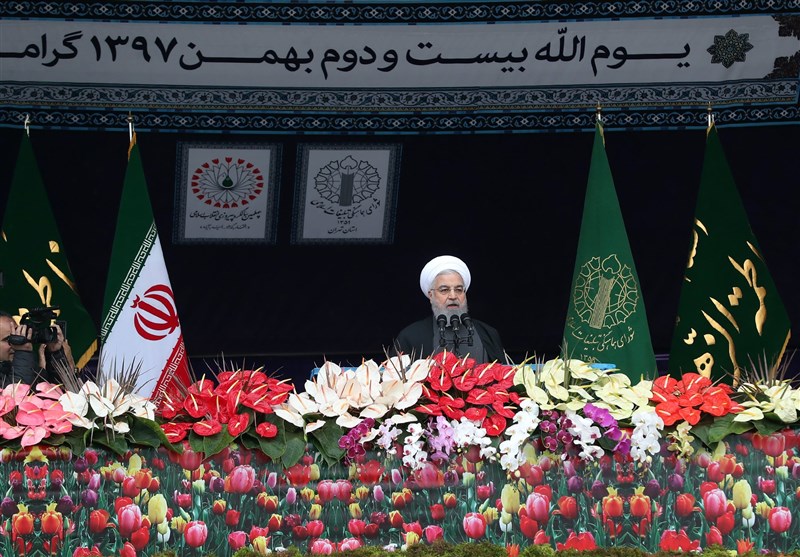 Navideshahed, "We have not asked and will not ask permission from anybody to manufacture various types of anti-armor missiles, air defense missiles, ground-to-ground, sea-to-sea and air-to-air missiles,” President Rouhani said in a large gathering of people celebrating the 40th anniversary of victory of the Islamic Revolution at Tehran’s Azadi (Liberty) Square on Monday.

The president also highlighted Iran’s military advances over the past 40 years, particularly in the recent 5 years, which he said have surprised the world, stressing that such progress in the military sphere will vigorously go on.

"We have manufactured whatever our Armed Forces need, including missiles, fighter jets, helicopters, frigates, submarines, personnel carriers, and individual rifles, all of which have been incredible,” he added.

President Rouhani then touched on Iran’s assistance for the regional countries, saying the Islamic Republic helped the nations of Syria, Iraq, Lebanon, Palestine and Yemen to achieve freedom and decide their own fate.

He also made a comparison between the situation of Iran before and after victory of the Islamic Revolution, saying the country has made great advances in agriculture, industry, oil and gas extraction, transportation, dam construction, power generation, development of ports, health care, social justice, science, academic education, pharmaceutical industry, space technology, and military industry.

Iran’s role in the region is more essential than ever, he added, noting that Iran is the only country that can help establish security in the regional nations.

"No plan in this region could be implemented without Iran. The global arrogance, Americans, and Zionists should know that victory belongs to the Iranian nation,” he concluded.

Iranian people from different walks of life attended nationwide demonstrations on Monday in celebration of the 40th anniversary of victory of the 1979 revolution which ended six decades of Pahlavi monarchy and founded the Islamic Republic in the country.

The crowd of demonstrators in the rallies paid tribute to the late founder of the Islamic Republic, Imam Khomeini, under whose leadership the revolutionary movements triumphed over the despotic regime of Pahlavi on February 11, 1979.

Imam Khomeini had lived many years in exile, in Iraq and France, before returning home and leading a historical revolution that overthrew Pahlavi regime.

The 10-day period from the return of Imam Khomeini until the revolution’s victory is celebrated annually in Iran, and is known as the Ten-Day Fajr (Dawn).