The events of December 7, 1953 have been mentioned biasedly in some historical accounts, where the reason for the student uprising is mentioned as a campaign solely against the UK... 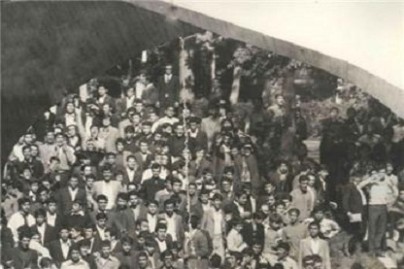 The bloods of Ghandchi, Bozorgnia, and Razavi, shed on December 7, 1953 at the University of Tehran turned into a symbol of anti-arrogance movements of students. To have a clearer idea of the event, the background of it should be investigated, because sometimes the reason for the student uprising is mentioned as a campaign solely against the UK, while the campaign at the University of Tehran was also partly against the US due to its part in the August 19 coup d’état and also it was a campaign against the Pahlavi regime prior to the reopening of the UK embassy in Tehran.

The UK, seeing at one side Mohammad Reza Pahlavi’s power in danger, and at the other side its share of Iran’s oil gone and done with, was trying to convince the US government about an August 19 coup d’état. Finally it managed to convince the US that in case the Mosaddeq government went on to live, resulting in the downgrade of the royal privileges, grounds be paved for the communists to rise to power in Iran.

Then US president Eisenhower, foreign secretary John Foster Dallas, and CIA chief Allen Dallas answered in the positive the UK’s request to carry out the coup. The CIA, Ashraf Pahlavi, General Swartzkov, and Hendersen managed to push the coup through by spending $21 million.

This was not kept out of the consciousness of students at that time. They were looking for some opportunity when they could give a due response to the US’s move in helping the coup. In November that year, it was announced that Nixon, then vice president of the US, was going to visit Tehran soon.

Mehdi Bazargan says Nixon’s plan to travel to Iran was one of the reasons why the students did as they did on that day: the national resistance movements was trying to help make the cry of indignation of the Iranian people known to the entire world. The students also wanted to lay waste the efforts of the Iranian regime and their UK and US supporters on representing the government of Zahedi (which came into office after the coup) as a legal government with the intention to reach their own objectives in a calm atmosphere, Bazargan added.

Mostafa Chamran, a student with the University of Tehran and one of the eye witnesses of the December 7 incidents said: The students had decided to show their indignation with the coup when Nixon arrived.

The reopening of the UK embassy

Another reason for the coup was the reopening of the US embassy in Tehran. Before the UK embassy was closed during the nationalization of oil, the Iranian crude was flowing into UK pockets. According to an Iran-UK agreement, 16 percent of the oil revenue would have had to be given to Iran. However, the UK later proved to devise ways now and then to withhold the tiny share as well. The reopening of the embassy, to Iranian students, therefore, mean the resumption of looting Iranian oil. This was testified by the consortium deal that was sealed after the reopening of the UK. The deal, signed between the Pahlavi regime on one side and the UK and US on the other, once more gave Iranian oil away.

After the December 7 incident, University of Tehran students published an announcement which mentioned the reopening of the UK embassy as one reason for the protests. It read: On the very first day after it was announced that the infamous relations with English colonialists was resumed, Iranian students raised their voices against this anti-national move. That day, all dignified scholarly figures and students unanimously said that they would not recognize this treacherous move. The government of the treacherous Shah, the Zahedi administration, intended to suppress the cries with bullets, but their strategy went wrong this time.

Chamran further wrote: The UK embassy was opening again and Denis Write, the charges d’affaire was to visit Iran and bring with him oil companies to monopolize Iranian oil once more. The public indignation was on the daily rise… the government of coup and the foreign colonialists were making preparations to take revenge on the revolutionary people, students in general, when the December 7 disaster broke out.

Mehdi Bazargan also writes that the reopening of the UK embassy was one of the key reasons behind the student uprising on December 7: It was one of the main missions of the American- English colonialists to resume the flow of the nationalized Iranian oil to Western markets. To carry that out, it was necessary to resume ties between Iran and the UK which had been severed since the fall of 1952 through the initiative of the Mosaddeq administration. The press of the resistance movement had already voiced their indignation with the upcoming visit of Write a few days ahead. The protests of students against the reopening of ties with the UK and the arrival of Nixon started on Saturday December 5 with speeches made in classes.

Also, the central committee of the Tudeh party issued an announcement on the occasion of the University of Tehran incident, where it stressed that the protest was because of reopening ties with the UK.  The treacherous government sacrificed three of the dignified students as it was attempting reopening of ties with the UK and surrendering the precious southern oil reserves to imperialists.