‘Down with USA’ ideological motto of Islamic Revolution

The Down with USA motto is in fact a warning call and standup call for Islamic nations against the schemes of the United States. Accordingly, the living on of this motto is owing to the Iranian nation’s morale to fight injustice 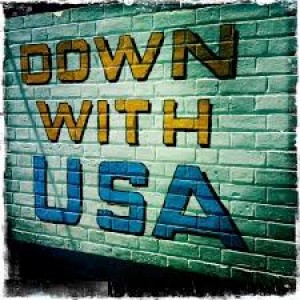 Fight on arrogance is one of the main facets of the Islamic Revolution which began its life in the Iranian calendar year 1343 and after the American citizens capitulation law in Iran was strongly opposed by Imam Khomeini. Besides outspokenly denouncing the Pahlavi regime, he started to enlighten people in the area and warn people from various groups of the downsides of that law.

Imam Khomeini spent about two years of his life to fight this trend. He managed to exhaust the Pahlavi regime. Therefore the evildoers of that time expatriated him to Turkey. This turned into a starting point for people’s fight against the regime of Shah.

The fight on arrogance trend was continued after the Islamic Revolution by the founder of the revolution and his friends and followers, so much so that the policy was not even grown dim during the life of Imam Khomeini, but was also exported to other countries which had been oppressed by the US, Israel, and the UK.

After the 1979 revolution and the failure of the US in continuing the Pahlavi regime, American officials started new measures and plans to derail the revolutionary people so as to create problems against the formation of the Islamic government which was at odds with their arrogant. Therefore, by establishing contacts with the interim governmental officials, they pursued their goals. Regarding that, Imam Khomeini warned against such economic relations and exchanges between Iran and the US and people followed him.

The passage of resolution against Iran in 1979 by the US on the pretext of revolutionary execution of Shah officials and US giving refuge to Mohammad Reza Pahlavi and his family increased the rage of Imam Khomeini and the nation against the US twofold. The great founder of the revolution on the 12th of Aban asked scholars, students, and religious pupils to expand their fight on the US with all might. Part of the announcement reads: Since in the coup of 1332 also after shah fled Iran the US had helped him to get back to power. Therefore the people of Iran were right to mistrust the issue of the Shah’s admittance to the US and call it another scheme to topple the Islamic government.

Thus was struck the next spark in people about fighting arrogance by the students of the line of Imam and the US embassy, called by the founder of the revolution as the spy den, was seized by revolutionary people. Despite the fact that many documents had been destroyed by Americans, yet many evidences showed the schemes of the US government against the Islamic revolution.

In his first reaction to the siege, the US president set economic sanctions and froze the assets of Iran in American banks and other banks with branches in the US. He then decided to cut political ties with Iran, a hasty decision which they tried to make up for on numerous occasions. But on the other side Imam Khomeini welcomed the move, saying "Honorable nation of Iran, I received a news about cutting ties between Iran and America. This is one, if any action that Carter has done in all his life to benefit the oppressed. Relations between a nation which was risen for liberty from the claws of international looters with a world-devouring looter is always to the detriment of the oppressed nation and to the benefit of the looter. We see this cutting of ties as a good thing, because this is an evidence that the US has been dismayed with Iran. I have repeatedly said our relations with the like of the US is a relation between an oppressed nation and world-devourers.”

It was thus that the Down with USA motto_ introduced into Iran’s political literature in 1332 by an anti-American student called Mehdi Shariat Razavi_ found new life once more and the government and people of Iran as a sign to show their objection to the inimical policies of the US once more shouted the motto and called for the US to stop interfering with the affairs of Iran.

The Down with USA motto is in fact a warning call and standup call for Islamic nations against the schemes of the United States. Accordingly, the living on of this motto is owing to the Iranian nation’s morale to fight injustice and disgrace the US in front of countries oppressed by world arrogance which is still rampant 37 years after the Islamic Revolution.

The Down with USA motto is a pronouncement of the truth and a cry of the oppressed which lays waste the efforts of the oppressor and discloses his wrong. It emboldens the people of world against the prevalent wrong-doer. The motto comes along our national interests and the preservation of the ideological and humanitarian dignity. We stress it, however, the Islamic Republic’s fight on arrogance is not limited to mottos, but as the late leader said, we are all bound to form a multi-faceted fight against the great Satan by scientific endeavor, economic activities, and boosting our ideological aspects.

It is to not that Imam Khomeini in all his revolutionary speeches set difference between the American nation and the American government, saying: We are not only not holding any negative outlook toward Western nations, but are on the contrary friends with them. We hold grudges against those governments which have treated the Iranian nation badly. In any case our approach to Westerners is fair and we will never be unjust to anyone.

Tags:
down with usa ، islamic revolution ، navideshahed
Subscribe to newsletter