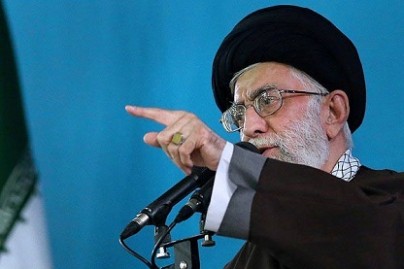 Navideshahed:
Following the Islamic Revolution, the West tried to be a hurdle against the progress of the Islamic Republic of Iran. Therefore, it tried in different occasions such as the Mykonos restaurant assassinations, military threats in the nuclear case, attempt to restrict Iran’s missile power, etc. to weaken Iran. But since all these attempts failed in the face of Supreme Leader Ayatollah Ali Khamenei’s staunch positions, the West has always failed to meet its goals.

Against such background, a summary of eight instances when the West’s attempts have been foiled by the positions adopted by the Leader are given:

In late summer of the Iranian year 1371, the assassination case was blown into a crisis against Iran through Western media barrage. Following the incident, the German Court in a biased move called Iran responsible for the shooting, not providing any evidence. After that, 12 European countries called their ambassadors home from Iran in a bid to further pressurize the Islamic Republic.

The Leader’s response to the move was a major factor in settling the issue, where he said, "In the first place, they should not let the German ambassador come to Iran for a while. The rest who want to return as a peace-making act, there is no problem. They went on themselves and now they are getting back. They was that their departure had no significance.”

After the Leader’s speech, Western countries saw that they schemes to isolate Iran had failed and then they decided to return their ambassadors to Iran.

2.       West’s political failure after the Leader’s statements on the nuclear case

The nuclear case is one of the most prominent issues in which the Leader’s position has had great impact in laying waste Western efforts against Iran. In the past 13 years, he has been leading the Iranian nuclear negotiators through the issue, his red lines being a criteria to ward off the enemy’s efforts against the country.

In late 2013, Israeli Prime Minister Benjamin Netanyahu said, "We are committed to do anything to prevent Iran from becoming a nuclear country.”

Shortly after that, the leader said in a meeting with Iranian nuclear officials, "The scientific nuclear movement should not by any means be halted or slowed down,” asserting that none of the country’s nuclear achievements will be left idle.

After well over one decade, the Leader’s positions proved of influence against attempts to eradicate Iran’s nuclear program, so much so that they finally resigned to accepting the nuclear Iran.

Under international sanctions against the Islamic Republic, tapping domestic capabilities has found a special place in Iran regarding the improvement of the country’s military power. Therefore, the West has always tried to limit Iran’s military power, including its advancements in the field of missiles.

As part of efforts to hinder Iran’s missile program, the US on occasions called discussion of the Iranian missile program an essential part to the nuclear talks, especially pointing out that ballistic missiles should be part of a deal on the Iranian nuclear program.

Under such circumstances the Leader said Iran would never negotiate its missile program.

Once he called the idea of limiting Iran’s missile power "stupid” and said, "They expect to limit Iran’s missile program while they have been constantly threatening Iran about military actions. Therefore, such threats are foolish.”

4.       Leader’s warning of Israel against military action on Iran

In early 2013, Israeli authorities started threatening Iran with military operations and they continued to boost their threats day by day enjoying the backing of the White House.

Following the threats, the Leader in a New Year address in the city of Mashhad said Israel is too small to count anything against Iran and added, "Sometimes the leaders of the Zionist regime threaten us. They threaten with military attack. But I believe they know well, and if not, they should know that if they make a wrong move, the Islamic Republic will reduce Tel Aviv and Haifa to dust.”

One day after that, US President Barack Obama said in a news conference in Jordan that a solution to the Iranian nuclear case would be non-military, showing a drastic back-up from their previous position.

The best way to approach Iran is diplomacy, and the US will continue to pressurize Iran without considering the military approach, Obama said.

5.       West backing down from having Iran’s military centers inspected

Through the nuclear talks, especially toward the end of them, the West tried hard to impose its demand of having Iran’s military centers inspected by the IAEA. At one point, US State Department Marie Harf said the continuation of the nuclear talks depended on whether Iran would allow inspection of its military facilities. The US even demanded that striking a final deal with Iran would include Iran’s consent to have the IAEA inspect Iranian military centers and interview a list of top Iranian officials, stressing that it would not sign a final deal unless the demand is granted.

Following such demands, the Leader said that attempts to inspect Iran’s military sites and interview officials was a scheme against Iran.

"We said we would not allow any inspection of military centers by foreigners. They say they must take interviews with our nuclear scientists, that is, to interrogate them. We would not allow any disrespect to our nuclear scientists. No country in the world would allow that.... such permission will never be given. Both enemies and those who are waiting for Iran’s response should know that.”

America’s backing down from this demand following the Leader’s speech was evident in an Israeli news agency which wrote that the US administration in a blatant back-down resigned to having the Iranian military sites inspected only after agreed by an Iranian-American delegation. It noted that by this new agreement, America’s plan to inspect Iranian sites anytime and anywhere had failed because an agreement by the delegation would take several months.

Since early 2011 the US started to threaten military action in Syria on the pretext of fighting terrorism. That year Obama said it was time for Syrian President Bashar Assad to be removed.

The Leader in a message taken to Assad that year said that Iran would support Syria and its president. This message underlined Iran’s unlimited support for Assad against terrorists and those which supported the terrorists.

The message set disagreement among Western leaders and has recently led to the point where they have said Assad would be part of a future solution to the Syrian crisis.
source: irdc.ir
7.       US quickly backed down from military threat against Iran after Leader’s warning

In June 2015, US Vice President Joe Biden and Secretary of State John Kerry said all options were on the table against Iran. The US intended by introducing the military option to isolate Iran and hamper its efforts. But shortly after the Leader said, "I do not understand the meaning of negotiations under the specter of threats…. The Iranian nation will not tolerate negotiations under the shadow of threats.”

Hours after the speech, White House Press Secretary Josh Earnest said Obama’s view was that diplomacy was the best way in dealing with Iran.

After refraining from sending the bodies of the dead Iranians in the wake of the recent stampede in Mina, Saudi Arabia finally resigned to gratifying Iran’s demands when the Leader spoke out.

The Leader said if the Saudi government disrespected Iranian pilgrims, it would receive a harsh response from Iran. After the statements, Saudi Arabia started to be more cooperative and sent the first convoy of bodies to Iran, to be followed by more.

In all the above cases enemies’ plots were hampered by decisive positions adopted by the Leader, showing the influence of Ayatollah Khamenei and the effectiveness his speeches laid on foreign countries’ approaches toward Iran.