An overview of House of Saud’s 11 Hajj mismanagement disasters

After the crane crash in Mecca this year which led to the death and injury of hundreds of pilgrims of the House of God, there were numerous speculations about the incident and its causes. 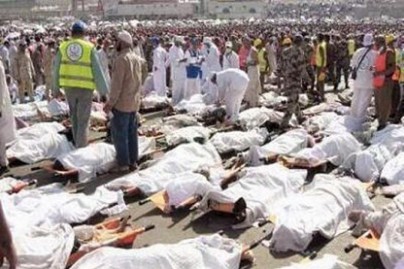 According to the Islamic Revolution Documents Center website: After the crane crash in Mecca this year which led to the death and injury of hundreds of pilgrims of the House of God, there were numerous speculations about the incident and its causes. At last, the issue was closed by putting the blame on sand storm and the demonstrations were ended. Creating excuses for this managerial scandal had not subsided yet when another bitter incident, on the day of the Eid al-Adha once again put Muslims in mourning suit. But this time again, Saudi officials cited natural factors such as the heat, the large number of the pilgrims, and lack of order among the pilgrims as the main causes counting for the incident in their helpless effort to find excuses. Despite these, historical records indicate that there have been numerous instances of Saudi mismanagement in holding the Hajj ritual. In many such cases, such as the slaughter of Iranian pilgrims in 1988, it is evident that the event has been quite willful.

Iranian Supreme Leader Ayatollah Ali Khamenei in a letter offered condolences over the bitter incident and announced three days of public mourning. He said: The Saudi government is obliged to admit responsibility for this bitter incident and to act to it according to the rule of rightness and fairness. Mismanagement and unbefitting actions which caused the catastrophe must not be overlooked.