“Insider” a book by Ala Bashir plastic surgeon, artist and favorite doctor of Saddam ‎Hussein featuring memories from Iraq under the rule of the former dictator has been ‎translated into Persian.‎ 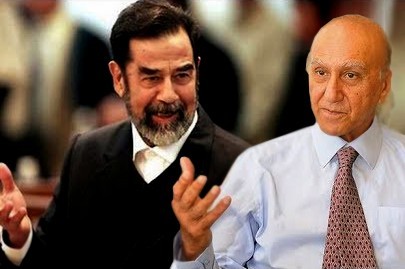 Navideshahed:
Ala Bashir is a celebrated Iraqi artist and a plastic surgeon who worked for two decades as a personal doctor and plastic surgeon for Saddam Hussein, the late Iraqi leader, and his family and inner circle. He is the former Professor of Plastic and Reconstructive Surgery at Baghdad University.

Although in various chapter of "Insider”, Bashir refers to different problems of Iraq under the rule of ‎Saddam Hussein such as widespread corruption among the family of the president, and Saddam's ‎shortcomings in resolving the problems of his country, with a peculiar sensitivity," tries to exempt the ‎former Iraqi dictator as the main person responsible for these damages to Iraq as well as ‎the other neighboring countries above them Iran.

Bashir was the top member of Saddam medical team who headed hospital in ‎Baghdad and treated Saddam as well as his family for many years.

Interestingly he is a noted Surrealist painter and sculptor who was always respected by the leader of ‎Iraq party and the book reveals that his status in Iraq was indebted to his Faithfulness to his ‎country's government.

Bashir escaped from Iraq two months after the US-led invasion that toppled Saddam in 2003.