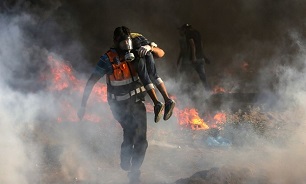 Navideshahed:
The body said 71 children and nine women were among the Palestinians killed, seven died in detention, 43 were killed in airstrikes and one – engineer Fadi Al-Batsh- was assassinated by the Israeli Mossad in Malaysia, Palinfo reported.

Out of the 71 children, the report added, 50 were killed during the Israeli crackdown on the "Great March of Return”.

During the reported period, 20 resistance fighters were killed in special operations.

The report also noted that 211 Palestinians had been killed during the "Great March of Return”, which started in late March, including two journalists and three paramedic.