People’s presence in 13th Aban rallies, sign of their insight

Presence of people in the 13th Aban rallies in commemoration of the 1979 take-over of the US embassy in Tehran is an indication of their insight, Iran’s prosecutor general announced here on Sunday. 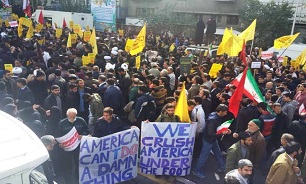 By the report of Navideshahed ( IRAN ) : "In critical conditions, our people know that they should have active presence,” Mohammad-Jafar Montazeri told reporters at the nationwide rallies.

The 13th Aban (November 4) is named in Iran as Student Day, which marks the take-over of the US embassy in Tehran.

During his remarks, Montazeri described the United Sates as the great Satan and the enemy of Islam and Muslims.

So, all should express enmity towards the US, he added.

Talking of the US anti-Iran sanctions, Montazeri said that it is not a new event, but it is "forty years that they have been santioning us.”.

After Washington's May 8 exit from the Iran Deal, formally known as the Joint Comprehensive Plan of Action (JCPOA), the US gave a 90- to 180-day wind-down period to other countries before it starts re-imposing sanctions on Tehran on November 4. The US move drew criticism of the world leaders, particularly the Europeans.

Sanctions will prepare the ground for growth and achievement, the prosecutor general said.

During the nationwide 13th Aban rallies, the Iranian people show hatred towards the global hegemonic powers and renew allegiance to the Islamic principles set by Imam Khomeini, the late father of the 1979 Islamic Revolution Imam Khomeini said.