The 139th volume of monthly “Shahed Yaran” with magazine responsible manager and editorial of “Mahbub Shahbazi” by magazines groups of Shahed is published and audience for buying the magazine could contact with Tel number of 88823584. 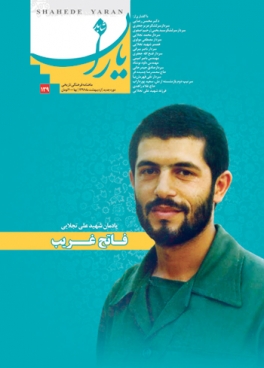 Martyr Tajjalaee in his speech in gathering of Pasdars of Seyed Shohada base, which was held after Valfajr 4 operation in 1361 was said: "Whenever I saw a father of a martyr I become ashamed to speak with them or a martyr’s mother when came to my house and said that do you have any news from my son? Where is he? How he became martyr? Where is his head? So hearing all these brought for me responsibilities. We must like Imam Hussein (a.s) put apart our family and children and …. And become scarify for Islam and we must be a completer for the way of Truth and the right path, the completer of Hussein’s (a.s) Karbala’s way.”

In a conversion that Dr. Mohsen Rezaee narrated from Ali Tajjalaee said: "perhaps the best name that we could put for Ali is "the divine Ali” or "the flying Ali”. Tajjalaee always was ready for flying toward his God.”

"Haj Mustafa Moulavi” who is from a few fellows of martyr Bakeri who came alive from the war, in a conversation with Navid Shahed said: "we with Ali look around Tabriz and we were looking for a suitable place for establishing military school. After a few days we find a suitable place and after a primary equipping the first educational base was establish in Tabriz in 1358 and we started training Sepah’s soldiers. This base named with name of "Khasban”, this naming was because of the name of a village, which its name was "Khaseban”, of course now its name is "Seyed al Shohada Base”.

Martyr Tajjalaee’s wife in a part of her conversation with Navid Shahed narrated: "one of my best times of my life was my engagement ceremony, it was a beautiful moment, it was supposed to Ayatollah Madani read our engagement Khotba, and he had a close relationship with Ayatollah Madani and whenever he came to Tabriz he go to him. We took in the car and with our families we went to the engagement ceremony, our family and a number of his friends were in the ceremony. I do not know the philosophy of God that all soldiers that were in our ceremony became martyr!! We were sited that Ali said to me: "I have a request from you, I heard that the pray of a brides in wedding ceremony would become true, I want you to pray for me that I become martyr, Do you like me? I said: "yes”, he said: "if you love me then pray for my martyrdom.”

It should be noted that martyr "Ali Tajjalaee” was born in fifth of Mordad of 1338 in Tabriz. He got his diploma in 1344 from Tarbiyat high school of Tabriz. He started his campaign activities in 1356 and because of these activities he arrested by SAVAK. He entered to Sepah Pasdaran in 1358 and in his green clothes started his duty as a training teacher. For fighting with counterrevolutionary went to Kurdistan, then in his migration to Afghanistan established the first training school of commanding Afghan’s fighters in Afghanistan. With the beginning of Iran’s war he returned to Iran and attended to battles of Dehlaviye and Soosangerd as an operation’s commander and Sepah’s operating vice. During the war he attended in Piranshahr’s battles in many operations and had different duties. He as a Responsible for operations in Khatam Anbiya’s Base in 25th Esfand of 1363 became martyr.

The 139th volume of monthly "Shahed Yaran” with magazine responsible manager and editorial of "Mahbub Shahbazi” by magazines groups of Shahed is published and audience for buying the magazine could contact with Tel number of 88823584.