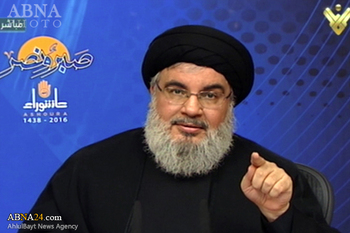 His eminence said that Imam Hussein (a.s.) after more than 1400 years still has the capability to awaken people.

"And that what happened during the Islamic revolution of Iran and the Islamic resistance [Hezbollah], as well as fighting all Takfiri groups. This logic, spirit and determination are still active and present.”

Meanwhile, Hezbollah S.G. said that "victory may mean disabling the fundamental goals of the enemy. When Resistance manages to prevent the enemy from achieving his goals, this means she triumphs.”

On the other hand, he noted that "there is a higher level of victory when Resistance prevents the enemy from achieving its goals while managing to achieve hers as happened between 1985 and 2000.”

"When we discuss who had the overpower in this world and who will be the winner in the afterlife, then we can talk about a victory and defeat,” Sayyed Nasrallah stressed.

His eminence pointed out that ISIL group, along with other Takfiri groups "who are trying to ‘become close to God’ by killing, beheading and captivity are descendants of Muslim bin Oqba.”
Tags: Secretary , Nasrallah
Subscribe to newsletter