Leader of the Islamic Revolution has said celebrating the memories of martyrs would contribute to spirit of resistance and instill the nation with a sense of freshness. 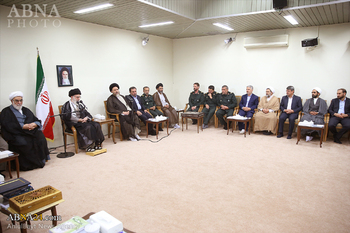 Ayatollah Khamenei had addressed earlier in late September a meeting of members of headquarters responsible for holding congress to the memory of martyrs of North Khorasan and Kohgiluyeh and Boyerahmad. That address has been published and Mehr News has been informed about the content of the address.
Leader of the Islamic Revolution urged that memories of the martyrs and their legacy be upheld and protected. "The war they [martyrs] fought against had been launched by the international participation to destroy our young Revolution and the memory of the founder of the Revolution,” he told the meeting.

He touched a theme recurrent in his addresses, the issue of soft war or cultural invasion elsewhere in his address; "the covered soft war launched by the enemy seeks to dampen public’s zeal for ideals of the Revolution and to foster an atmosphere where people would be easily manipulated in line with enemies’ plans; they had been busy with through giant propaganda machine, political and economic pressures, and intelligence operations to promote a mode of despair and hopelessness among the public; however, large part of their propaganda and efforts had been unavailing, since our people have learned lessons of resistance during few decades,” he had told the meeting.

Ayatollah Khamenei called government officials as well as other part of the public engaged in martyrs’ affairs to provide the public in due course martyrs’ lifestyle and their manners in attempts to inculcate their values in the young generation and to provide examples of right conduct epitomized in the martyrs vis-à-vis worldly pleasures, extravagance and plundering the public treasury.

He suggested that the art society should come to the fore to bring martyrs to the public through their effective artistic creations. "The values fostered and cherished by them were Islamic Revolution, the God Himself, rule of Islam and the Islamic teachings; "their wills well reveal these cases, which are left for us to read and to reflect upon their content as guidelines in our private as well as public life,” he concluded.
Related News

US soldiers cannot claim they are fighting for their country: Ayatollah Khamenei