Brigadier-General Pilot Mohammad A’tiqechi in an exclusive interview with Navid Shahed’s reporter with remembering his first memories about his friendship with martyr Yasini. 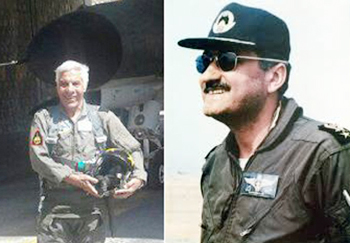 In this while, we were transferred to Shiraz for a short period for Quantum rear cabin and both of us serve in a same battalion with rank of second lieutenant. After passing the course, martyr Yasini transferred to Bushehr’s sixth prey base.

He about Yasini’s behaviors and morality added: AliReza was a logical, brave, talented and hardworking man. He because of his long hours of flaying got promotions with Pilot A’bbas Douran. He beside his military morals was in love with his family and when we were in Shiraz we had family travels.

He said: I remember, we were going to hit Mussel’s refinery and I was the leader. At night martyr Yasini said to me: you did a lot of flying, you go and stay alert, on other hand he sent one of our friends, martyr Davood Ekradi, although it wasn’t his turn for flying.

Brigadier-General Pilot Mohammad A’tiqechi in continue explained martyr Yasini’s reject and added: martyr Yasini rejected three times that one of them was referred to his flight to Sardasht. In that time, Iraqi planes put us in livestock up, in the way that Iraqi plane shows itself and when Iranian plane went after it, another hidden plane hit Iranian plane. AliReza once trapped in this livestock and forced to reject and hidden himself in astragalus jungles and we save his life with my informing to Kermanshah’s base.

This martyr’s fellow said a memory about him: martyr Yasini was the deputy of operations base in Hamadan and he recommended me to test a thousand pound bomb at height of 40 thousand feet which is suitable for hitting a city or not. When AliReza requested this from me, I became upset and said that I couldn’t hit unmilitary people.

I was so upset but because it was an order and it was trial I accepted. I flight and tested the bomb and I realized it isn’t suitable. When I returned, I was still in the cabin that martyr Yasini came up with a telegram in his hands and said: Mohammad, you see you were wrong, I immediately canceled this point and the general staff accept it.

He about the way of martyr Yasini’s martyrdom said: in 15th of Dey of 1373 at 6.30 O’clock Jet star plane that was carrier of commanders (martyr Mansour Sattari, martyr Yasini and martyr Mustafa Ardestani) flight from Tehran to Kish for an important meeting.

It was supposed to in return the plane had a short seat in Esfahan’s air base. After a short visit from this base at 8.30 PM would came back to Tehran. Suddenly at 8.42 PM the Pilot announced that because the pilot’s window is open we should have emergency landing. A few moment the plane crashed in northern direction of Esfahan’s base and all of them become martyrdom.

We should added that martyr Yasini was born at 1330 and when he became martyrdom he was 43 years old and he had three boys and one girl and his memories and brevities never clear from Iran’s people mind and Air Force staffs. He after Brigadier-General Mohaqeqi had the most flight hours with Phantom (2759 hours). Furthermore sixth pre base of Bushehr was designated by his name.

Yasini’s family gave a martyr and a veteran to the Islamic revolution and Iran. Martyr Reza Yasini who was martyr in Chazabe strait at 17 years old and Abbas Yasini who was a veteran. Yasini by starting Iraq and Iran war had an important role in attacking to Iraq in 140 freund operation. He because was a worthy commander at 10th of Esfand of 1372 became the chef staff and coordinate deputy of Iran’s Air Force and until his martyrdom was in this duty.

I did not drop bombs on women and people’s children

An Unseen Photo of Iranian Simorghs