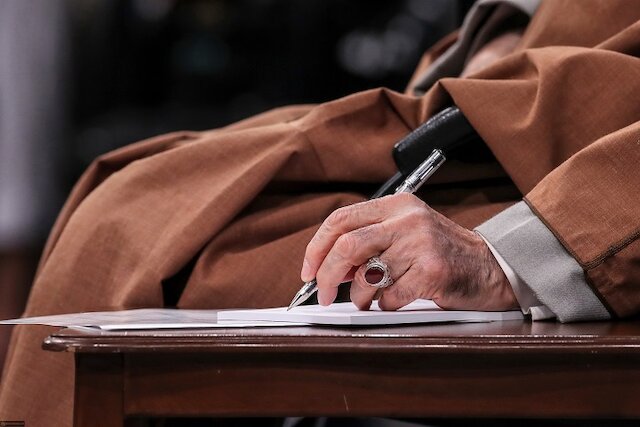 In answer to the report presented by Rear Admiral Ali Shamkhani, the Secretary of the Supreme National Security Council, with regards to how the casualties in recent events should be managed, Ayatollah Khamenei, the Supreme Leader of the Islamic Revolution, agreed with the suggested proposals and stated, "These measures should be taken as soon as possible. With regard to dubious individuals from any group, action should be taken in a manner which is closer to Islamic compassion.”
This report was prepared due to the order of the Supreme Leader of the Islamic Revolution, which was given immediately after the recent events to the Secretary of the Supreme National Security Council asking for careful investigation of the roots, reasons and factors leading to the turmoil as well as a prompt review of the status of the casualties and their families.
In the report, it was suggested that according to the existing legal framework, civilians who were killed in the conflicts without having had any role in the protests and disturbances be regarded as martyrs. Thus, their families should be covered by the Foundation of Martyrs and Veterans Affairs.

Moreover, it was suggested that financial compensation and appeasement be given to the families of those who died in any manner during the protest demonstrations.

With regard to those who were killed in the recent events while carrying guns and in conflict with the security forces, it was decided that after investigating the background and situation of their families, the respectable families be regarded separately from the person who committed the crime, and their families be attended to and appeased appropriately.

Concerning the families of those from the third group who were under suspicion for being a part of the unrest, the Leader of the Islamic Revolution ordered that Islamic compassion should be shown and that their families should be attended to.
Based on the order and emphasis made by Imam Khamenei, actions have already begun for dealing with the casualties, which have been recorded, from the recent events in the various provinces.

The Secretariat of the Supreme National Security Council