Remains of 46 martyrs back home

Remains of the bodies of 46 martyrs of Iran-Iraq war (1980-88) have been returned to the country from Mehran border point, western Iran, on Tuesday. 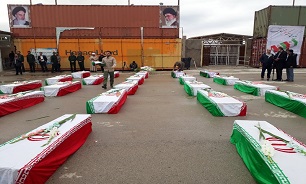 Navideshahed:
The bodies, belonging to Irani forces killed in Operations Karbala-6, Dawn 3, Ashura 2, were discovered in Zurbatiyah and Mandali cities in east of Iraq near Mehran border.

They will be transferred to Tehran for identification and funeral procession.

Three thousand people from Ilam Province in the west of Iran were martyred during Iran-Iraq war; 10,000 were maimed and 332 were kept prisoners of war.