News ID: 385278
news » Public
AA
The Supreme Leader in a meeting with a group of officials of Azerbaijan province and Qom:

The Supreme Leader in a meeting with a group of officials and cultural activists of Azerbaijan province and Qom said: The great Arba’een pilgrimage is a sign for expanding of soul and getting ready for martyrdom. 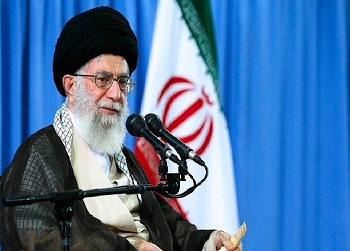 With NAVIDESHAHED report, according to information base of Ayatollah Khamenei the Supreme Leader of Islamic Revolution, yesterday morning (Monday, 22th of Aban) in a meeting with a group of officials and cultural activists of Azerbaijan province and Qom he attributed from magnificent and amazing phenomenon of Arba’een pilgrimage and prayed for the pilgrims and appreciated from the organizers of this ceremony.

Ayatollah Khamenei believed that the great Arba’een pilgrimage is a sign for expanding of soul and getting ready for martyrdom in all Islam’s world and added: attendance of this massive population from all over the world with existence of all terrorists’ treats is a great phenome and indicates the culmination of thinking for fighting in the way of God and is a general readiness in this path.

The Leader of Islamic Revolution believed that the spiritual and great phenome of Arba’een is unprecedented and unexplained and with attributing from holders of this massive move said: thanks to Iraq government for holding this great move, to dear Iraqi people for hosting from Aba Abdullah’s (PUH) pilgrims sincerely and cheerfully, to Iraqi militant youth and Hashad Sha’bi, security officials of this ceremony and official of A’tabat, Najaf and Karbala and we ask for divine blessings for them.
Related News