The pure body of the 21 Fatemiun and Zainabiun shrine defender martyrs were buried in Qom. 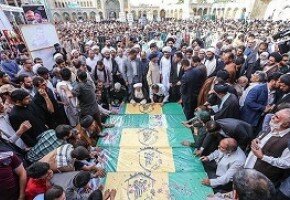 Navideshahed: Yesterday morning the pure body of the 21 Fatemiun and Zainabiun shrine defender martyrs were buried in Qom.
Some of the Fatemiun and Zainabiun shrine defenders were martyred in the defense Ahlul Bait (AS) shrines against the Takfiries Terrorist Group in Idlib which led to liberation of some parts of the region. It is necessary to mention that Idlib is a city in northwestern Syria, 59 kilometers southwest of Aleppo, which is the capital of the Idlib Governorate. It has an elevation of nearly 500 meters above sea level.
Message End/