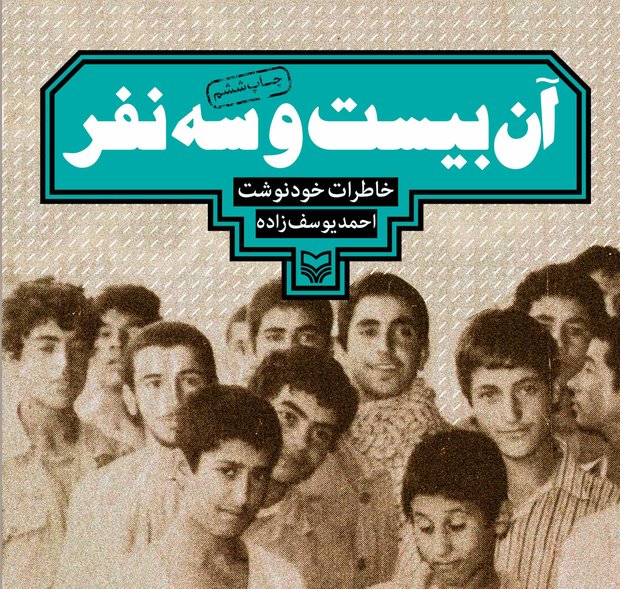 Title: The Twenty-three Ones Author: Ahmad Yousefzadeh Subject: Non-Fiction (Memory) Year of Publishing: 2017 / 58th Edition No. of Pages: 408/Paperback Size: 14 × 21 ISBN: 9786001755842 Awards: The book was honored by the supreme leader of Iran.
about book The age of Ahmad (the author of the book) is sixteen. His name, after military training, is finally listed on the list of expeditions to the warfront. He participates in Operation Baytol-Moghaddass . But after a while, he has taken as a prisoner of war. There, during his captivity in the Iraqi POW camp, he is called a «minor child» due to his young age and his small body. He is being taken to the city of Basra along with 150 other prisoners of the war. While they were eating bread and potatoes, they were filmed. Saddam Hussein watches the film. According to his orders, young captives are identified. Then he is provided with a list of twenty-three of them. Saddam intended to take advantage of this opportunity for propagation and to pretend that those minor captives have been forcibly sent to the war fronts. He orders them to wear new clothes before being taken to Saddam›s palace. Saddam takes a picture with them, wants to use the picture for propaganda purposes. Subsequently, the group of minor captives is transferred to Al-Rashid Garrison. From there after one and half month they are transferred to the Ramadi Camp. After a while, their picture appears in the «Alssowrah» (morning daily in Iraq). The newspaper claims that Iran refuses to accept children who have been forcibly sent to the war fronts.  As the battle continues, Iran gets involved in an operation which lasts twenty-three days, during which Iranians capture twenty-three of enemy’s soldiers. Those POWs were also young. The Book of "Those 23 People” is the narration/the story of eight months out of 9 years of captivity of one of those 23 captives of Iranian teenagers. The book not only narrates what took place during the captivity of those juvenile POWs but also reveals what takes place beyond the war fronts. When the author writes of his mother›s affection and love, he describes how difficult it is for her to be away from her youngest son. That is what he heard from his friend’s mother (through his brother): "After the death of your father you are the only one can financially support us (the six-member family), you are our only hope. Whom do you want to appoint as our financial guardian?” The reader finds out that the war is not only the front line but also 7
extends to the deepest parts of towns and villages. One of the strong points of this book is its being, simple but at the same time attractive and descriptive. Yusefzadeh has traced the human condition and the atmosphere of the events well and patiently. He has brought the reader into the horrible Iraqi POW camps.  In the story, the writer describes flashback into his early life back in his village and then scenes of his captivity. In his book, by depicting the mental states of the prisoners to the reader of the book he helps them a picture and realize how it really feels to be a captive. Those twenty-three people include four chapters. Each chapter describes one of the adventures during the writer’s captivity. In addition to the writer’s eloquent writing skill, compiling and arranging of the book has been done appropriately. Hence the reader finds the book easy to read. This book is among the top best sellers, is one of the most successful books in Iran . The 58th edition is now in the market. Hundreds of thousand copies are sold so far
Tags:
navideshahed ، martyrdom ، iran iraq war
Subscribe to newsletter