Among the historical monuments of Rasht city in Gilan province, the tomb of Mirza Kouchak Khan Jangali reminds us of the struggles of a freedom fighter to protect Iran against the machinations of colonial powers. 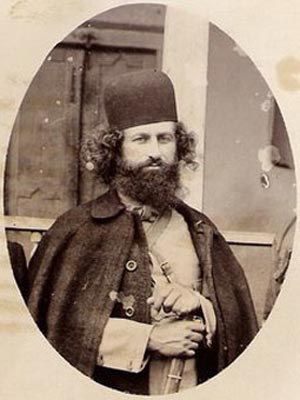 The blend of these elements with the green landscape surrounding the tomb is in line with the freedom-seeking spirit of the prominent figure laid to rest there.

The facade of the building is decorated with bricks and tiles. The ceiling of the tomb is tiled and supported by wooden logs while the top sections of the walls have been covered with verses of Holy Qur’an.
Role of Gilan in Constitutional Movement
The evergreen province of Gilan has been the land of courageous freedom fighters. Those who have conducted research about Gilan confirm that the people of Gilan are brave, independent and have never bowed to foreign powers.

In fact, the independence and freedom of Gilan in previous periods up to a large extent are indebted to the bravery of these people. The people of Gilan have played key roles in many of the liberation movements in Iran.
For instance, although the central gravity of the Constitutional Movement was in the Iranian capital, Tehran, the2 people of Gilan played a decisive role in the victory of this movement. One of the prominent figures of Gilan province, who played a pivotal role in the Constitutional Movement through the Jangal Movement, is Mirza Kouchak Khan Jangali.

Aspects of this Gilani freedom fighter’s life and struggles are reviewed here.

Life of Mirza Kouchak Khan
Born in the city of Rasht in 1881, he was highly interested in acquiring knowledge in his childhood. He attended Salehabad School in Rasht and later on studied Islamic sciences in Tehran.
He joined the Constitutional Movement in Iran in the early 20th Century and participated in the conquest of the cities of Qazvin and Tehran.

After the Constitutional Movement, he returned to his homeland and began his political activities.

Upon the breakout of World War I in 1914, although the then Iranian government officially announced its impartiality in war, the British and Russian troops invaded the country.

The foreign powers’ commanders started to interfere in the national affairs of Iran and foreign forces and their agents and mercenaries trampled upon the rights and freedom of people.
Mirza Kouchak Khan consulted with Tehran’s religious authorities and concluded that if a resistance movement were launched against the injustices of foreign powers and their domestic agents, injustice would be curtailed and the stage would be set for the reformation of the community. Based on this ideology, Mirza went to Gilan and laid the foundations for his Jangal Movement. In this manner, a number of selfless freedom fighters formed an alliance to fight injustice, expel foreign forces and establish security and social justice.

Since Jangal Movement was supported by a majority of people, especially the grass roots, the Russians, who were stationed in northern Iran became fearful of the expansion of this movement and pressed state officials of Gilan to suppress and wipe out this movement.

Following the termination of World War I in the year 1918, the British forces, in continuation of their meddlesome policies in Iran’s internal affairs, made strenuous efforts to force Mirza Kouchak Khan to surrender to British troops.

But, when their ominous attempts to this end failed, they tried to cause discord among Jangal Movement freedom fighters.

Finally, the plots of hostile informants caused a rift among Jangal Movement leaders and dealt a heavy blow to this movement.

On the other hand, the communist Soviet regime, which had ostensibly pulled out its forces from Iran, interfered in Iran’s internal affairs, based on a number of pretexts.

For instance, in 1921, the Red Army pounded Anzali Port under the pretext of confrontation with the Czarist troops. Thereafter, Red Army troops entered the city. The Russians tried to persuade Mirza to cooperate with them, but he never submitted to them due to his Islamic beliefs and freedom-seeking spirit.

The delivery of Mirza’s letters of protests disappointed Russians and, therefore, the Russian troops plotted a coup against him and even tried in vain to kill him