Shaaban Nasiri participated in the different important operations of Hasht al Shaabi in Iraq. He also was the commander of the Badr Corps. Finally he was martyred in Iraq by the Daesh Terrorist Groups on 2017/05/26.

Navideshahed - Martyr Shaaban Nasiri lived in Karaj (city at the Alborz province). He was martyred after 38 years of activities in forefronts and the sacred defense, in the defense of Ahlulbait (AS) Holy shrines and joined his martyr friends. General Shaaban Nasiri was the most experienced millitary commander of Iran in Iraq.
Shaaban Nasiri participated in the different important operations of Hasht al Shaabi in Iraq. He also was the commander of the Badr Corps. Finally he was martyred in Iraq by the Daesh Terrorist Groups on 2017/05/26. 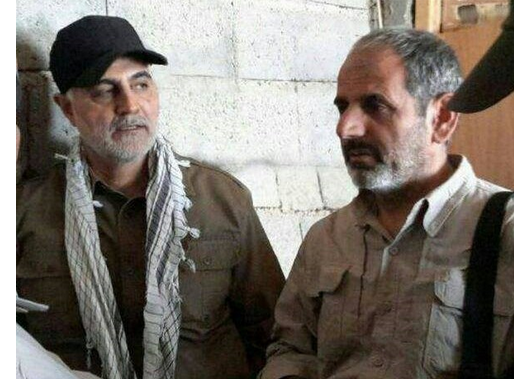 Martyr Nasiri was injured during the 8 years of the holy defense and became veteran. He also was injured for several times in the defense of Ahlul Bait (AS), he went to Iraq after the healing period.
Martyr Nasiri had two children, a boy and a girl. Nasiri joined the Islamic Revolution Guards Corps on 1979. He had many different responsibilities during the sacred defense like being the commander of battalion.
He went to Iraq from the begining of the presence of Takfiri groups in Iraq and Syria since he knew Iraq and it 's forces well and easily could make a connection with them (Iraqi people). Finally General Shaaban Nasiri martyred by the ISIS in Iraq on 2017/05/26.
Message End/
Tags:
navideshahed ، issar and martyrdom ، Resistance martyrs ، shaaban nasiri ، shrine defender martyr ، shrine defender ، sacred defense ، holy defense ، iran iraq war
Subscribe to newsletter