The Mountainous Area called “The Head of Jabar”.

Everyone was doing something. Someone was writing his testament and the other was preparing his equipments. Someone else was washing his hands and face and using perfume on his clothes to get prepare for prayer. 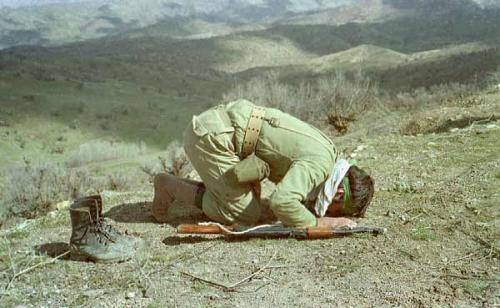 Navideshahed - Everyone was doing something. Someone was writing his testament and the other was preparing his equipments. Someone else was washing his hands and face and using perfume on his clothes to get prepare for prayer.

The commander asked Jabar who was yawning to fit and arrange his hair.

When Jabar asked the reason from the commander surprisingly, Ali laughed and pointed to the hair of Jabar.

Jabar frowned at him and he asked Ali to do his own work; it means that it was none of his business.

Jabar was a war veteran who was tall, think and a messy condition. Despite of this, he was so brave and strong in fighting. The main problem was related to the hair of Jabar that was always messy. He would never comb his hair.

The commander scratched his head and he was not able to find the name of that mountainous area on the map.

Ali laughed and he said: "Since the mountainous area is the same as the head of Jabar messy and full of obstacles, so lets name it the Head of Jabar.” Since Jabar was so far away from them, he did not notice the issue.

After a few hours, the marsh sound of operation was broadcasted by the radio and the speaker excitedly said that the significant and strategic mountainous areas of Jabar’s Head were captured. When the war veterans heard that news, they laughed so much and Jabbar got so angry and he shouted: "Who named this mountainous area the head of Jabar?”