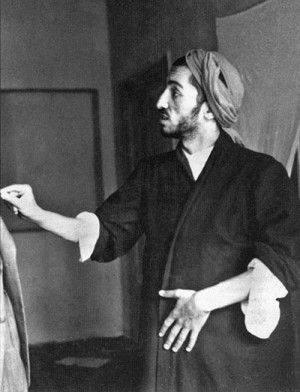 Navideshahed:
My acquaintance with Fada’iyan-e Islam (Devotees of Islam) and martyr Nawab Safavi started by the study of supporting newspapers as "Unions" and "Battle of the people" and their official newspaper: "The Declaration of Brotherhood" and was completed by receiving a copy of the book " declaration of Fada’iyan-e Islam (Devotees of Islam) or Handbook of facts" from martyr Nawab Safavi by the late Hojatoleslam Syed Hashim Hussain (third person of Fada’iyan-e Islam (Devotees of Islam)) with a letter....
At that time I was 14-15 years old and lived in Tabriz. After I moved to Qom, I got acquainted with "Brothers” personally and some kind of cooperation and consultation began until the issue of "Baghdad Pact" and Iran’s accession to this imperialist military convention occurred and it was supposed that they would execute the responsible for this betrayal, "Alaa Hussein," the prime minister and servant of the king, and "Mozaffar Zolghadr" took over the execution, but was not successful in action.
"Alaa" immediately to prove his and his master’s, the king, servanthood more to the imperialist West, with bandaged head, left for Baghdad, but at same time, brother martyr Abdolhossein Vahedi along with another brother, left for Baghdad from Qom – Ahwaz to implement the issued "decree" in Baghdad.
Martyr Vahedi, the night before traveling to Ahwaz, in Qom, in "Hojatieh school", roosted in a room next to mine and in the morning went to the shrine and then left for Ahwaz. But apparently, he was found and arrested when entering Ahwaz and was transferred to Tehran and in Tehran, in the office of General Teimour Bakhtiar – the ruthless imperialist agent – and by him, he was martyrized. 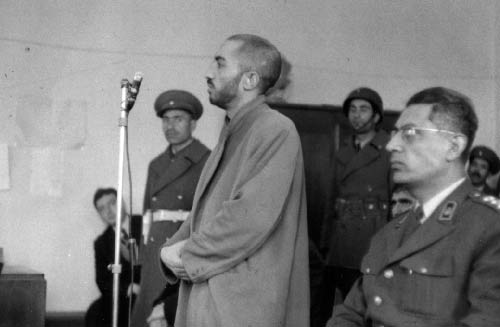 After that martyr Navab Safavi and Mohammad Vahedi, who lived in Ayatollah Taleghani’s house, according to what Ayatollah Taleghani had told me: "left house early in the morning and an hour later, agents poured into Ayatollah Taleghani’s house to arrest brothers, but they did not find anyone. Finally martyr Navab Safavi and his comrades were arrested in the house of "Hamid Zolfaghar” and after the spurious military trial, in the morning of 27 January 1334, they were shot by the King’s henchman executioners.
Martyr Navab Safavi and his faithful companions, Fada’iyan-e Islam (Devotees of Islam), were forerunners of establishment of an Islamic government after Shahrivar, 1320. In this path, they were not only against the monarchy – dictatorial regime of Pahlavi theoretically, but in action, instead of wasting time, or wasting even one bullet, and killing a constable or Zhandram who were typically oppressed people by tyrant ruling system, participated in the revolutionary execution of those whose presence or survival could both strengthen the foundations of the usurper regime and hurt the basis of our sovereignty and national-Islamic independence and were an impediment on the way to the foundation of "Allah” government.
The clear and decisive position of Fada’iyan-e Islam (Devotees of Islam) and their dear leader, martyr Navab Safavi, against Reza Khan and his son and also our other enemies and their fundamental and critical measures in their struggle against the traitor ruling class, is basically not an issue that friends or foes could deny it.
Studying the book of Fada’iyan-e Islam (Devotees of Islam), titled "declaration of Fada’iyan-e Islam (Devotees of Islam) or Handbook of facts", which was once published in Aba’an, 1329, and the second time in Khordad, 1332, is essential and can illuminate the fact that: without assessing their role in this movement, we cannot achieve an accurate summary of the continuous history of contemporary Islamic movements and Muslim nation.
Essentially, the important point that can be observed in the life and work of Martyr Navab Safavi is this direct combat, without fear of the king and the despotic monarchy. Quoting sentences from several parts of this book can illuminate this fact that the Muslim children of this country did not recognize the despised Pahlavi regime officially and also they had always fought against it. Please note:
"... Iran, Thanks to the traitor government, is a land of predators ... The poor is sick, homeless, hungry, and unemployed, and moan of poverty and hunger and dishonest nobles, dignitaries and thieves of the country do not pay attention.
"... Worshiping a weak creation called the" king" who is weaker than most people physically, spiritually and mentally, is illusory and out of ignorance and stupidity. ... Admiring a person whose name is king or minister is inappropriate and flattery. These statements, to the king or president or minister, shall be called the document of ignorance. "
"Our declaration to you, the enemies of Islam and the usurpers of Islamic government; King, Government and other directors whom we know well: you traitors, Iran is an Islamic country and you are the thieves and usurpers who have seized the Islamic government and are ready to run everyday….”
Studying the history of foundation of Fada’iyan-e Islam (Devotees of Islam) and the description of their revolutionary fights and interpreting the text of the book which can introduce our people’s struggle forerunners to the youth generation require more time and better facilities that unfortunately, now we lack both because of the critical situation of the country. Hoping one day we would be able to publish "Documents of Devotees of Islam Movement ", and pay our respect to our martyrized brothers who have been ignored by all parties up to now.
source: icmiw.ir
Tags:
navideshahed ، issar and martyrdom ، martyr navab safavi ، fadayian islam
Subscribe to newsletter