Iranian capital of Tehran has hosted the second grand summit of Sayyids (descendents of Prophet Mohammad (PBUH)) on Thursday as Shia and Sunni Sayyids from across the country and a number of foreign guests attended the event to mark Islamic unity. 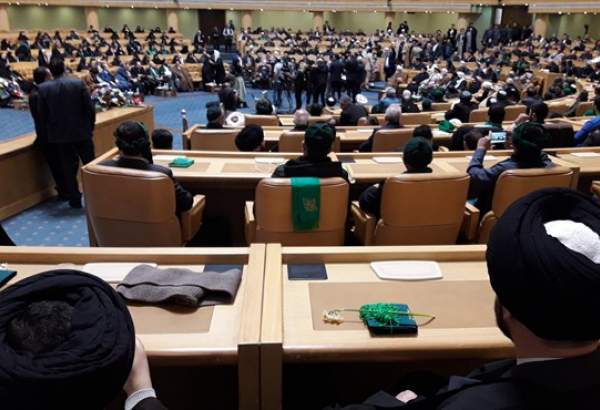 Navideshahed:
Held by Iran’s World Forum for Proximity of Islamic Schools of Thought the second grand summit of Shia and Sunni Sayyids was held in Tehran to boost solidarity of Shia and Sunni descendents of Prophet Mohammad (PBUH) and pay tribute to household of the prophet on the eve of the birth anniversary of Hazrat Zahra (AS), reported Taqrib News Agency (TNA).   Mohammad Nazemi Ardakani, secretary of the second summit of Sayyids noted that the move aims to boost solidarity of the Shia and Sunni communities and foil the hostile plots targeting Muslim nation.   He referred to genealogy of the Sayyids in different countries and distribution of over eight million descendents of Prophet Mohammad (PBUH) across the globe.   "Yemen is home to majority of the descendents of Imam Hassan (AS), second Shia Imam and grandson of Prophet Mohammad (PBUH)” said Nazemi Ardakani.   He expressed regret that the Saudi-based Sayyids, previously among rulers, are hiding their origins from extremist Wahhabis over concern for their lives.   Summit for the Sayyids was an initiation of Ayatollah Mohsen Araki, secretary general of World Forum for Proximity of Islamic Schools of Thought in line with the major objective of the institute to boost unity among Muslims.   The meeting has hosted representatives of the resistance and Shia, Sunni  communities from across Iran.
source: taghrib news
Tags:
summit of sayyids ، tehran ، navideshahed ، issar and martyrdom
Subscribe to newsletter