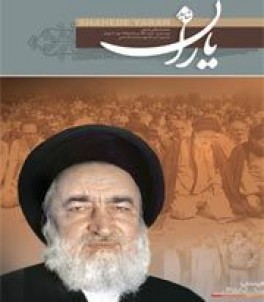 Navideshahed:
A Review on the Shahed Yaran Magazine Related to Martyr Madani as ‘Teacher of Ethics’ On the Threshold of Martyrdom Anniversary of the Second Martyr of Altar
Navideshahed: The 57th version of the cultural- historical Shahed Yaran Magazine is relevant to the memorial of martyr Ayatollah Seyed Asadollah Madani which was released by collaboration of Research and Information center of the Foundation of Martyrs and Veterans Affairs in 131 pages in August, 2010.

The chief secretary of the article in this version of Shahed Yaran magazine in the preface has mentioned: "Martyr Madani, the teacher of Ethics: only by a little thinking in the biography of brilliant characters of the Islamic revolution history we can conclude that their lives has always been towards reviving the original Islam and performing the divine percepts. In fact they have struggled so much in this path. In some cases they have sacrificed their lives in order to reach this objective. One of the great fighters in this field is the respectful martyr Ayatollah Madani. At that time he spent his adolescence time and capital to martyr Navab Safavi in order to stand against the misled movement ‘Kasravi’. He did not give up his fighting until the final moment and despite of his torturing disease ‘Tuberculosis’ both in prison and during his exile, he caused very badly attacks on the body of the Shah’s regime and he did not give up his conflicts and enlightenment. Also at the end he sacrificed his blood in order to irrigate the strong tree of Islamic Revolution. This respectful martyr lost his mother at the age of 4 and he lost his father at the age of 16 as well. At the beginning of his adolescence, he left his homeland and he went to Qom city and he learnt lessons from some great professors such as Ayatollah Seyed Mohamamd Taghi Khanssari and Ayatollah Hojjat Kuh Kamari. After that he benefited form the mysticism and philosophy lessons of Imam Khomeini. After that in order to continue his education, he went to Najaf. Within a short period of time, he became one of the famous professors of the Najaf seminary. He imitated from some great sources of imitation such as Ayatollah Hakim, Ayatollah Khansari and Ayatollah Kuh Kamari. Martyr Ayatollah Madani fought against Baha'i cult from the initial time of his adolescence. Pahlavi’s regime had allowed the Baha'i cult and all the capitalists to be free in order to suppress Islam in all the places of Iran especially in Azarbaijan in a way that they were able to take the control of some of the big factories such as electricity at that time. The grand Ayatollah Madani that from the adolescence time and from that time that he gave all of his properties to martyr Navab Safavi. Ayatollah Madani gave some speeches and he revealed the realities. By these speeches, he boycotted using the electricity of this factory and he removed these agents from Azad Shahr. Ayatollah Madani was the first person who obeyed Imam Khomeini in the movement of 1963 in Najaf. He played a very significant role in releasing the announcement of Ayatollah Hakim regarding this issue. At the time of the government of Abdol Salam Aref, Ayatollah Hakim issued a verdict to fight against the fall and removal of communists; that is why he was insulted by the Iraqi regime as well. He went to Kufeh as a sign of criticism. Martyr Ayatollah Madani gathered the clerics and all of them wore the shrouding clothes and they went to the house of Ayatollah Hakim and they called him to issue the demand of Jihad. Martyr Madani went to Khorram Abad in 1971 based on the demand of Imam Khomeini in order to teach the religious affairs. He established the Kamaliyeh seminary there. Since that time, due to the activities that he did against Shah’s regime was exiled to the cities Noor Abad Mamsani, Gonbad Kaboos, Kangan Port and Mehabad. He went back to Qom city after the victory of Islamic Revolution. He went to Hamedan city after a while based on the invitation of the people of this city. Also he was opted from Hemedan as a member of the assembly of experts. He played a very significant role in the approval of the supreme leader. After the martyrdom of Ayatollah Ghazi Tabatabei, based on the demand of Imam Khomeini, martyr Madani became the Friday Imam of Tabriz city and he revealed the nature of the opportunist, nationalist and anti-revolutionary agents. He neutralized the conspiracies of the colonialism belonging to the domestic agents and he guarded the Islamic Revolution. He never forgot living in a simple method during his lifetime. He always fought against the capitalist morale practically. This issue caused that the conspiracies of enemy to take place against him in order to remove him and this issue had been explicitly known. He would consider worshipping and piety as something important. He believed that the victory over the enemies and dictator agents only through purification of self and correction of humans. Based on the comment of Imam Khomeini, he was an excellent scholar and a teacher of ethics and intellectuality that during all of his valuable and precious lifetime did not give up fighting against the oppressors. Also by his innocent martyrdom on Friday, September 10, 1981, he made the anti-revolutionary agents and MKO so isolated. He stood on the highest position that he himself imagined it. It was a position which was at the continuation of the red line of martyrdom and the line of Ali (AS) followers and the continuity of the Islamic Guardianship and the followers of the prophets.

Imam in describing this respectful martyr said: "If they would express some excuses for their crimes and brutality, in the martyrdom of this great scholar who would think about nothing except serving to the Muslims and Islam, they could not express any excuse except revenging over Islam and the respectful nation of Iran. The war veteran people of Iran and specially the zealous people of Azarabaijan who lost such a great scholar and the teacher of ethics, they know their defeated opponent; and they get so serious in order to retaliate.”

Ghasem Tabrizi in a section of the scientific and Jihadist life of martyr Ayatollah Seyed Asadollah Madani titled ‘Being Fans for the Fighters of Independency and Freedom’ has mentioned: Someday when he had sat down near the tablecloth, he noticed that the oil of the soup is so much. He asked this question from the servant that aren’t you Muslim that you don’t economize in using the oil? He responded: Mr. Cleric, the soup of all the persons is not the same, since you have got so weak and the food is soup, I have only poured more oil for you.

While martyr Madani had got so angry, he said: This work can be considered as two sins. At first I thought that you did not economize in using the oil, but right now I noticed that you have committed a very bigger sin and it is that you have considered discrimination as well.”

In a section of the interview of Shahed Yaran with Hussein Ali Taher Zadeh has been mentioned, when Ayatollah Madani offered Imam Khomeini to talk with Ayatollah Shariatmadari, he accepted. After the visit of Imam Khomeini with Ayatollah Shariatmadari, the problems of Azarbaijan were resolved in an extraordinary form and all the persons who would act against us, they gradually changed their attitudes and they became our fans and gradually we got stronger. Therefore we had more opportunities to expand our activities. Fortunately at that time, the Radio and Television of Azarbaijan would not support Bani Sadr. When he was elected as the president, Ayatollah Madani showed his lack of support by his silence. The Muslim People Party was a party in which most of the Shah’s agent had gathered in; after defeating the Muslim People Party, we took the guns of this group and we asked many of the personnel of this group who were unemployed in order to provide jobs for them. Also we absorbed some of them for the work. It is interesting that some of them joined us although they were previously members of the Muslim People Party. They would take our mistakes as well.

In a section of the interview of Shahed Yaran with Dr. Mohammad Ali Sarkhani has been stated: The people would consider him as Mr. Madani and a revolutionary man who was a real worshipper. Mr. Madani had sincerity and honesty and he was not malicious. He was great and honest. The people also liked him so much. They would take part in the public prayers of him and they would listen to his words; they would complain of each other and the governmental systems to him as well; martyr Madani was a very independent, honest, sincere man who believed to Islam and revolution and Imam Khomeini. The only problem was that he would accept the words of the revolutionary agents due to this issue that they were revolutionary; while some anti-revolutionary agents had penetrated these institutes. But he would try to help them due to the sincerity that he had to the Islamic Revolution.