Starting late August 1978, Imam Khomeini’s house in Iraq was under siege by Iraqi security forces.The Iraqi Ba’ath party forces would prevent people from visiting him.The situation led Imam Khomeini to decide to leave,which he did in the very October 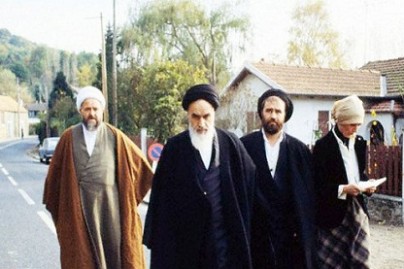 Ahmad says: The reason why Imam left for Paris was to be sought in what happened in a few months before in Iran. As the Iranian nation’s demonstrations heightened, the governments of Iran and Iraq during their meetings in Baghdad decided that Imam’s activities were not only dangerous for Iran, but also so for Iraq. The Iraqi people’s attention to Imam and the zest of Iranian pilgrims was not so small as for the Iraqi government to overlook. Therefore, they called Mr. Doaei in order to clearly convey to Imam the standpoint of the revolution council of Iraq. The standpoint included such points as: 1. You can stay in Iraq and live your normal life, but abstain from political activities which mar Iran and Iraq’s relations. 2. If you continue your political work, you should leave Iraq.

Imam’s decision was clear. He turned to me and said: Fetch my passport and yours. I did so. As Imam allowed, we told about his decision to leave for Kuwait to our close friends in Najaf, 7 or 8 of the most insiders. Right away two invitations were went to Imam and me from our friends in Kuwait.

The eve of our departure was something. Like any other night, Imam slept on time, and like always, one and half hour to the dawn he woke up for the night prayers.

We headed for the Kuwaiti border. It was found out that Kuwait government had been informed. From the capital someone came whose final word was made clear in one hour as "no entry!” We then returned. Iraqis were waiting. They delayed us from 2 in the afternoon till 11 evening. We then left for Basra. With all his fatigue, Imam woke up for night prayers after three hours. I prayed the morning prayer with Imam and then asked him about his decision. He said "Syria”. I said, "What if they did not let us in? Where to if they did as Kuwait did?” Neighboring countries were assessed one by one. Kuwait did not allow, then Sharjah and Dubai would not allow as surely. Saudi Arabia, that country used to say bad things all the time. Afghanistan or Pakistan? No way. Only Syria was left, Imam was right. But we could not fly by the seat of our pants. We should enter a country that does not require visa, from where to contact Syrian officials see if they are ready to accept us without preconditions, that is, by not limiting imam in any way.

I suggested France, because a short stay in France could be effective and Imam could better depart his message to the world. He accepted. We went to the airport in the morning. They delayed the airplane. It was late 2 hours.

We arrived in Paris. In order for our turbans not to attract attention, Imam went by himself and we followed a distance behind. That very night they sent people from Élysée Palace, telling us they had faced the case, and whether they wanted it or not, the ayatollah had come. That, if they knew they would have not allowed. They asked for time to visit. Imam said let them in. They came and said he did not have permission to do the smallest thing. Imam said: We though here it was not like Iraq. I say my word wherever I go. I would go from airport to airport and city to city to tell the world that all of the world’s oppressors have joined hands so that the people of the world do not hear the oppressed. But I will tell the world of Iran to the world. I will tell the world what situation Iran is living in.

The liberal French (!) left Imam in such a predicament that he could not say a word for about 20 days. But of course we would read his statements for Iran. See how they treated Imam and how they treated those who went there on a hijacked plane!

Sometimes the news anchors would say they had not seen such a thing, a room 2 by 2 meters, without any fine parts, yet so much hustle and bustle, with no desk or chair, a cleric talks, and then a country rocks!

Iranian political activists started visiting, from Iran, European countries, Asia, and Americas, almost everyone would come and go and tell Imam to consent if the Shah left, because the US and the Army could not be defeated. But Imam would say: You do not interfere with people. They want the Islamic Republic.

I hereby outspokenly say: 1. Imam himself decided the departure, and nobody interfered at all. Only I suggested Paris that night, which he agreed to. 2. He would write all of his statements. If otherwise is told, it should be denied. If anybody claims he brought Imam to Paris, or took him from there, or wrote him a word, that is blatant lie.

After two days of stay, we went to a village 20 miles from Paris called Neauphle-le-Château. That was Mr. Asgari’s He welcomed us so. A house was hired in Paris where to guide people who would like to come to Neauphle-le-Château. Imam would make speeches every night. Then it turned to one or two nights a week, then changed to Friday nights and Sunday afternoons, since students from around Europe could go there only on Sundays. In the beginning there was nobody, but then it grew well crowded, so much so that one day they staged a good demonstration.