Martyrs address the people after their martyrdom: Ayatollah Khamenei 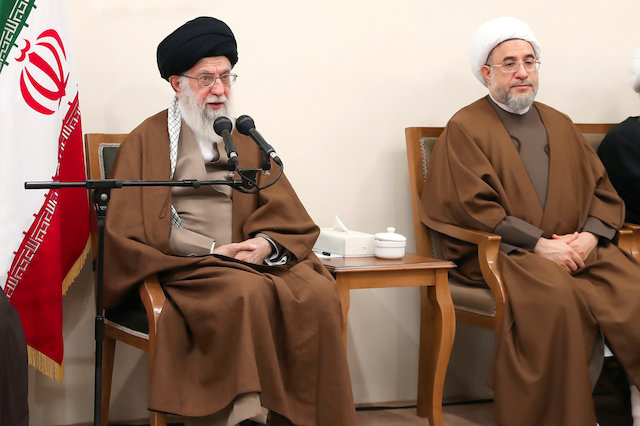 At this meeting, Ayatollah Khamenei praised the role of martyrs in promoting spirituality among the nation and held: Martyrs promote spiritual life in the country. Spiritual life means being spirited, having a sense of identity, it is being purposeful and pursuing goals in life; it means moving towards ideals, never stopping; this is what the martyrs do; this is what the Qur'an teaches us.
The Leader of the Islamic Revolution stressed that martyrs serve the Islamic society before and after their martyrdom and that their message should be perceived by everyone, stating that: Before they depart, martyrs defend by devoting their life, i.e. their bodies. When they depart, they defend by their souls: "And with regard to those left behind, who have not yet joined them (in their bliss), the (Martyrs) glory in the fact that on them is no fear, nor have they (cause to) grieve.” {Qur’an 3:170} You view, their ‘glory’ relates to after their departure. Before they depart, martyrs devote their life, their bodies and their material movement to serve Islam and the Islamic society. Their spirituality, their voice is heard only after their martyrdom; they talk to the people: "who have not yet joined them (in their bliss)”--this refers to us. We should not be hard of hearing so that we can perceive the voice.

His Eminence added: And God, the Exalted, has made this voice influential, truly influential; so when a martyr is narrated to have said some precise and appropriate words, they really influence the hearts; they revolutionize the hearts.

Ayatollah Khamenei honored the martyrs who sacrificed their lives to protect the holy shrines and dubbed their efforts as alerting to those who perceive it. He asserted: The young martyrs who go to defend the holy shrines these days-- or those who have gone and have been martyred, including dear martyrs from Qazvin-- their words, their actions, their moves, their memories and talks about them are all awakening and alerting.

Finally, Ayatollah Khamenei pointed up that any effort to make martyrs and their message be forgotten is futile, adding: Some people tried to make martyrs be forgotten, they could not. The opposite happened. Today, thanks be to God, the martyrs are our role models.
Source:khamenei.ir
Tags: khamenei , leader of revolution , navideshahed , martyr , martyrdom
Subscribe to newsletter