He was sent by the authorities of the air force to complete his professional training on the F14 and F4 to America . 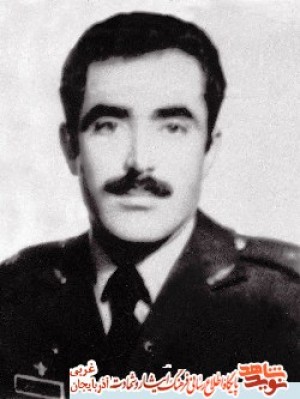 He was sent by the authorities of the air force to complete his professional training on the F14 and F4 to America .

By the report of Navideshahed ( western Azerbaijan - Iran ) :

He was sent by the authorities of the air force to complete his professional training on the F14 and F4 to America . martyr Khaled Haidari was born in Mahabad ( city in Iran ) in 1950 . he was a religious man and did his religious affairs in the best way . as he took his diploma , he entered air force faculty and passed its training courses successfully .

He moved to America to continue his education. Khaled Haidari took his English degree in the USA . he turned back Iran in 1977 . when the Bathi regime started the unfair war against Iran , he was martyred in 1980during the mission but his pure body never found . Finally his pure body found in 2011 and moved to his home town .

Khaled was born in 2nd of Aban ( the lunar date ) in 1950 , in a religious family who were believed in Islam in Mahabad .

He had spent his childness beside his family . when he was 7 years old , he went to school which was located in their village . after the years , …. He entered the primary level . he was a very clever boy , he had never left his pray . he really was the symbol of a good man among his family .

He was a very polite person and had a very good behavior with his family and relatives . during his study had learnt Art and calligraphy since he became a professional painter and he had remained many master pieces .

As he took his diploma, entered his favorite field which was pilot . he entered the air force faculty , finally he took his degree after 3 years … he was sent to America to complete his education . some of his friends narrated that : Khaled never stopped his religious affairs . During the time he had taken his English degree successfully and came back Iran . after some years he went to Hamedan to work with F4 .

From the beginning of the imposed war he and the other pilots started to defend their country . finally he was martyred in 1980during the mission.

Khaled Haidari was the first martyr pilot in the sacred defense , he is also the martyr pilot of the Islamic Revolution Air Force .

Source: foundation of martyr and veteran affairs of the West