By the report of Navideshahed ( Alborz – Iran ) : 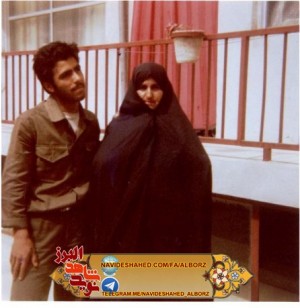 As he left me I started to cry I missed him so much . after a month, sent us a letter and his pure body brought us at it was written in his letter . dear mom … if you do not see me again , see Hussein , we got worried and called him . when do you come back ? we asked him … whenever the war finishes … he answered us . he was in Sumar as the war started . we all were at the home and watching tv , suddenly some of our relatives came to our home . it was cleared that they had heard the news and understood Hasan’s martyrdom . what’s up ? how is Hasan ? they asked us… not bad… he had sent us a letter some days ago … they were too worry … my uncle told my husband that Hasan injured during the battle and he is in a hospital in Tehran , let’s go and see him … we went … 200 Tomans were in his suitcases … one of his friends whose name was Hussein brought us his suitcase . what did he say at the moments of his martyrdom ? I asked Hussein … one day before his martyrdom … he injured by a bullet war , we told him you shall not come to the fore front you must stay and rest but he did not accept and came during the way we suddenly heard a voice that said : oh I burnt … we went and hugged him … we gave him water, but he refused to drink and told us :

I want to martyr like Imam Hussein ( AL ) . if I martyred brought my body to my country and show to my family .