A poetry collection entitled as the Flight Travelogue encompassing best poems of four Sacred Defense poetry festivals in Ilam Province will be published by the end of the current year in Persian calendar (March 20). 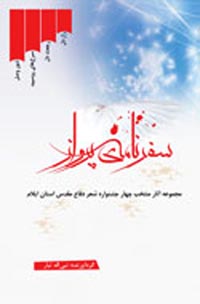 As he said, each chapter of the book is named after the title of the festival in which the poems were presented.

He went on to say that the collection encompasses both modern and classical pieces mostly by younger writers.

The collection is published in 100 pages by the same administration in a bid to motivate emerging Sacred Defense poets to keep on their work.