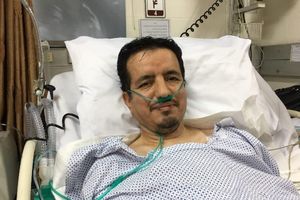 Rahim Ali Bakhshi starts his words as follows:  After the war I faced with many problems in a way that I had forgotten the pain of my injury. The God rewarded us a disable child and his medical costs are so high for us and since I don’t have a source of income, my life has become so difficult for me.

Unfortunately the authorities of the Foundation of Martyrs and Veterans Affair do not pay attention to the chemically injured patients whose injury is less than 30 %. They only consider the percentage of injury. They have forgotten that we are breathing hardly and we face with shortness of breath. They are trying to get documents to show that we have taken part in the military operations.
Name: Rahim Ali Bakhshi
Father’s Name: Yosof
Date & Place of Birth: 1966- Nahvand
Date & Place of Dispatch: 1981- Tehran
Presence Duration in the Battlefields: 7 Years
Injury Percentage: 25 % Chemically Injured Patient
Place of Residence: Tehran

The authorities have forgotten that we are suffering the pains resulted from chemical weapons and they are looking for the documents of war. During the war no one was thinking about the documents that might be required later. No one knew that the effects of chemical weapons might appear on the body after 20 years. So they were not trying to get the documents relevant to the military operations… During the war all the fighters would try to stay in the battlefields more and to fight with the enemy.

Sometimes the Iranian war veterans had bad health conditions in a way that they could not stay fresh. Right now the authorities ask us to provide documents for them to prove that we are chemically injured patient and that we can’t work. I can’t even do a simple work and my only income is the salary that I receive from the Foundation of Martyrs and Veterans Affair and this salary is not sufficient to respond the costs and expenditures of my life.


Ali Bakhshi after talking about his problems paused for a few minutes and he told us to ask the next question.

He also recalls the memories of the Iran-Iraq war and he says: I was 16 years old when I left school and I went to the battlefields of Iran-Iraq war; at first since I was too young, the would not allow me to go to the battlefields. So I changed the contents of my ID card and then after accomplishing my military training, I was dispatched to the war zones. I went to Kurdistan along with my friends. We started our service as guards.

I really wished to go to the frontiers, that is why I returned to Tehran and after accomplishing my military training I was sent to the battlefields from Shahid Beheshti Garrison.

In 1982, still the army had not been formed. I was sent to the frontiers along with the brigade of Mohammad Rasul Allah. I started my service in Zolfaghan battalion, Instruments Unit, Mortar 123 mm.

Ali Bakhshi defines the story of being exposed to chemical weapons as follows:

I was exposed to chemical weapons for three times in the battlefields. For the first time I was exposed to chemical weapons in Shakh Shamiran war zones located in the mountainous areas. We walked for two days to reach the mountains areas. After constructing our rifle pits, we stationed in the war zone and we were suppose to start the military operation at the next night.

It was midnight when we were awakened by the sounds of Iraqi aircrafts. When we came out from our rifle pits, we observed that the Iraqi aircrafts were moving in low height. They dropped some rockets on the war zone and they left there so quickly.

At first the bombs did not act, but after a few minutes the rockets exploded and a whitish powder covered the whole war zone. The commander of our battalion shouted and he said: "Its chemical gas, wear your masks”. We all moved to our rifle pits and wore our protective masks, but it was useless and all of us were exposed to chemical weapons.

After a few days we noticed that the anti-revolutionary militants had revealed the military operation and the Iraqi Baathist enemy had employed poisonous gases against us to prevent us from launching the military operation. At that time, since I was so young and powerful I did not feel the effects of chemical weapons on my body so much and I stayed in the battlefields.

For the second time I was exposed to chemical weapons during the military operation "Valfajr 8”. Since the enemy had lost great parts of its lands, it started the use of poisonous gases to recapture Fav war zone. During this operation, the Iraqi Baathist regime employed big scales of chemical weapons against us. The number of the injured patients of this operation was so high. When we were taken to a desert hospital, the number of injured patients was so high in a way that there was no empty bed for us in the hospital to stay. They burnt our uniforms and then they injected an ampoule for me. When I observed that the situation is not good there and the number of injured patients is so high, I decided to go back to the battlefields once again.

Breathing had become difficult for me after the military operation "Valfajr 8”. I always had headache and nausea, but since I was a lover of war, I did not like to leave the battlefields. When I observed how the bodies of the fighters had been burnt and they could not be distinguished, I decided to stay in the battlefields as long as the war is and to retaliate because of the blood of martyrs.

For the third time I was exposed to chemical weapons during the military operation "Karbala 5”which took place in Shalamcheh war zone near Fish Lake. This time I was not able to return to the battlefields anymore; I was sent to Ahvaz to receive treatment. Many blisters had appeared on my body.

My mother was crying continuously.

After passing my convalescence, though my family was against this issue, but I went back to the battlefields once again and I stayed in the war until the end of war.

Ali Bakhshi also recalls the days after the war and he says:

After the war I always faced with shortness of breath. I had critical headaches, but my doctors did not know the reason. In 1975, I faced with shortness of breath. After doing some medical tests, my doctors found out that my pains are due to chemical weapons. I have been under health cares since that time. Each day that passes, my health condition gets worse and I become weaker.

This chemically injured patient regarding his family says: I got married with Ms. Giti Navabi in 1991. Right now we have a child whose name is Ali.

Ali is a disabled child who was born deformed. Since his medical costs are so high, living has become difficult for us. Since I’m not able to work, I have to face with many problems. Even this year I was not able to pay the education costs of my child; but despite of these problems, I still thank God that he rewarded Ali to us.

Ali Bakhshi complains against the authorities and he says: Unfortunately the authorities only consider the percentage of our injury and those chemically injured patients whose chemical injury percentage is low are not allowed to benefit of the services and facilities. I can’t work and since the costs of my child is so high, I have faced with a plenty of problems.

I hope that the authorities to present a solution for the problems of chemically injured patients so that they will have lesser concerns and anxiety.

I don’t want anything for myself, because I believe when I went to the battlefields of Iran-Iraq war I dealt with God. We did not go to the war to get injury percentage and to benefit of materialistic things. We had divine ambitions. I only ask the authorities that they provide an environment in which my family to live comfortably.

At the end of this interview I hope that God rewards health for all the chemically injured patients and their families and I hope that the people of my country to live in peace and security all the times.